Last week, was a national holiday in Japan. Why? Who knows? Who cares?! It means no work, no school and LOTS of fun.

Actually, what it really meant was traipsing to Osaka to buy a second-hand printer we’d found on the Internet.

The morning stated badly – as in the old-married-couple-row kind of badly. Darling Calle had been asked to buy eggs the evening before. When it was subsequently revealed that there were no eggs, his first excuse was “How was I supposed to know that we were totally out of eggs?”, which changed to the more preposterous, “I couldn’t afford to buy the eggs!” What was wrong with walking to the ATM which is on the way to the supermarket and withdrawing money, I shall never know.

The result – I had an insubstantial breakfast and was incredibly grumpy. This mood was accentuated by the fact that I had to then pay for Calle to accompany me on the trip as JP Bank ATMs are located inside post offices, which, unsurprisingly, are closed on national holidays. To make matters worse, when changing stations we were directed the wrong way by two locals independently (NB: they weren’t even drunk!)  and ended up walking BACK the way we’d travelled on the subway, making it even further to reach the right station. As it turned out, it wasn’t going to be a successful day for directions.

SO…we arrived in Osaka later than intended. With only time to sit in café before we had to go on our printer mission.

Printer collected, deposited in locker, plans for Osaka castle postponed by rain, we found ourselves wandering along a shopping arcade, mainly full of low-end eateries and gaming zones. But AH! was it good to be strolling in Big City air. How I miss that living in Kyoto. We entered a game zone where my money-hunting mode overrode by conscious senses and I located myself a 1,000円 (~£8.70)  note – nice! It, therefore, felt like a legitimate activity to try and win some kind of paraphanalia relating to possibly the strangest popstar ever to exist…..because she doesn’t actually exist. Yes! Japan is home to a CGI superstar.

So after perusing the store, and Calle bemoaning the lack of decent sci-fi in stock, we had to hunt out a restaurant before I gave in to my brewing cannibalistic tendencies. You can read about our lunch, all the weirdly-named eateries and gross food by clicking here.

Refuelled on Western food, or at least, a Japanese attempt at Western food, it was time to hit the shops. But which direction to go in? Where was the best shopping district? We could see a couple of giant department stores but we wanted to find smaller shopping districts. Sadly, that was not to be. Whilst stopped outside a conveni, a man sidled up to me, giving me a smile and a nod. Are you lost? he asked. It was pretty clear that whether we were lost or not, he was going to “help” us. He wore a leather jacket and was swigging cheap beer from a can. He was definitely inebriated. “Shops? I know shops! Big shopping centre! Follow me!” Our protests that we’d already seen the shopping centre were in vain. We were escorted there….so we decided we might as well enter the 9 storey monstrosity.

The name of the mall itself was intriguing: HEP FIVE. Now I’d only heard of Hep A and B. But conveniently, Wikipedia, informs me that there are actually 5 hepatitis virus forms. Could it be that you can find them in this mall, all under one roof?! Don’t forget about the Hepatitis Whale to keep you company as you shop. I like to think of him as benignly spreading STDs with the help of his cousins, the Sperm Whales.

We perused the fashion shops, all aimed at the young market and yet with prices way above high street shops in the UK. Why? Probably because they have to fund projects like this to invite people in:

However, this mall has subsequently become a very important place for me. For a very personal reason. I decided to get married. I can remember the very place. It was on the fourth floor. We’d just come up the escalator from the third floor. And then I realised: I HAD TO WEAR THOSE WEDDING DRESSES OVER THERE, LOOK LOOK LOOOOOOK!

Check these babies out:
http://www.dressblack.co.jp/collection/wedding/index.html

Actually, the ones in the store were even more ostentatious, and possibly nauseating to many. But I love them! I want giant flowers and bows all over my wedding dress. I can see it now… I just need to convince Calle to marry me and pay for the dress… and for the divorce should he fail to buy eggs again.

We continued on our upwards journey until we got to floor 7, where for only 500円, we got to ride a really slow ferris wheel, 106m up in the air. Calle was completely comfortable with the height.

The views it afforded were amazing! Can’t wait to go again on a sunny day! 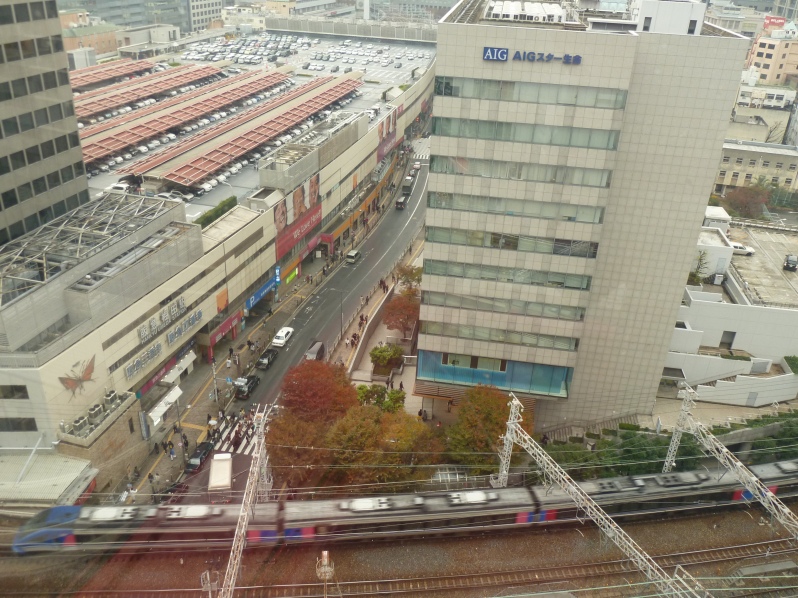 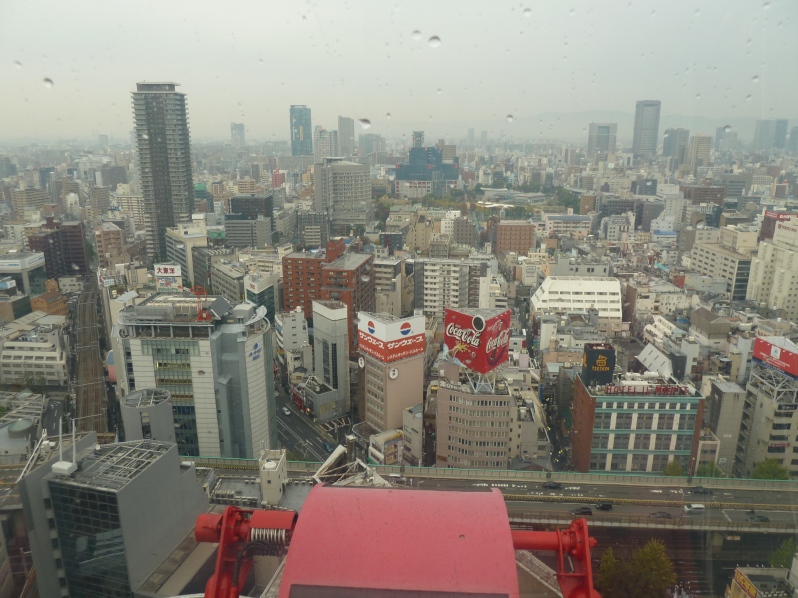 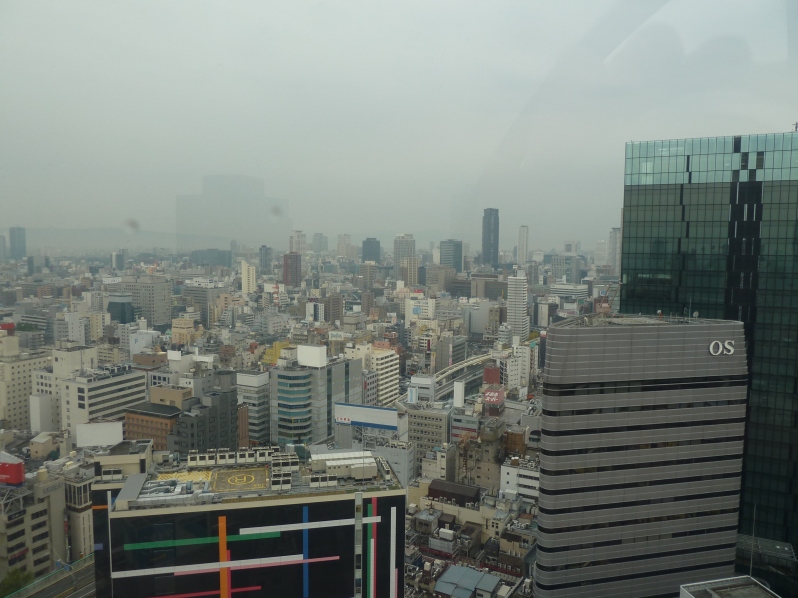 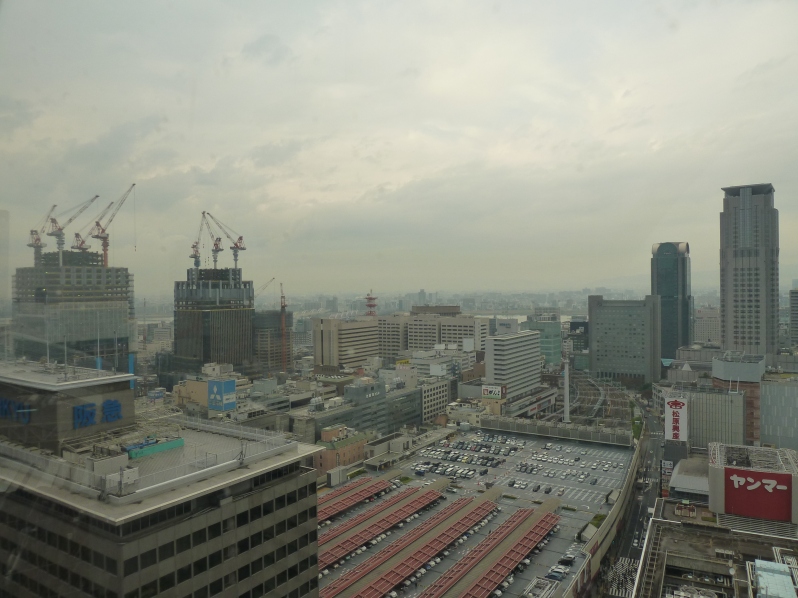 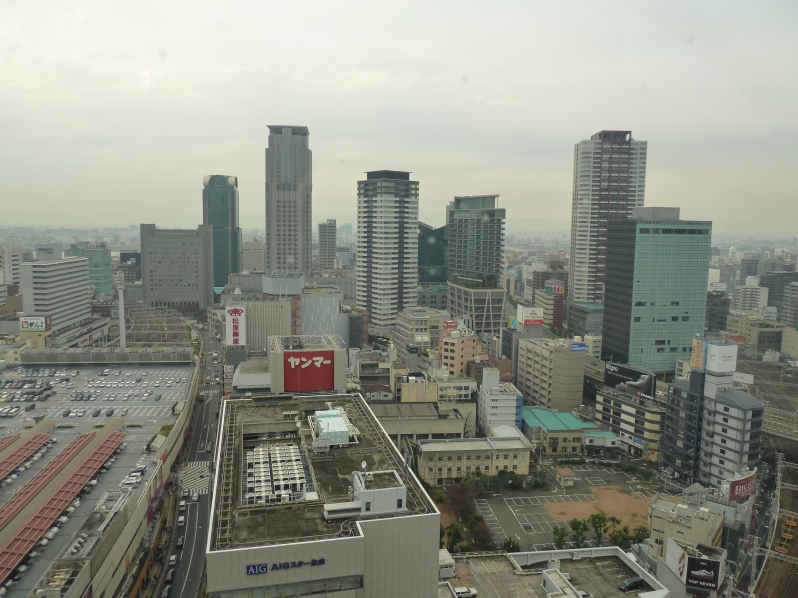 Our day concluded by attending a Thanksgiving party, hosted by my employer, Tom Brown, of Tom’s Burger Bar and Brown’s English. He cooked a meal for a small army. Check it out: