I’m in Sweden! Yes, that’s right – I’m going to be welcoming the new year whilst wearing several layers, peering at knee-deep snow and trying not to end up face-first in it!

Whilst I have lots of great Swedish food to bring you, I thought I’d finally blog about the amazing Swedish winter forest on Brick Lane, back in early November.

Swedish cider, Rekorderlig, teamed up with fantastic Scandinavian food company Norse by Norsewest, to transform the Truman Brewery into a winter forest. It was surreal to sit among trees, with forest foliage underfoot, illuminated by low-lights from the ceiling. 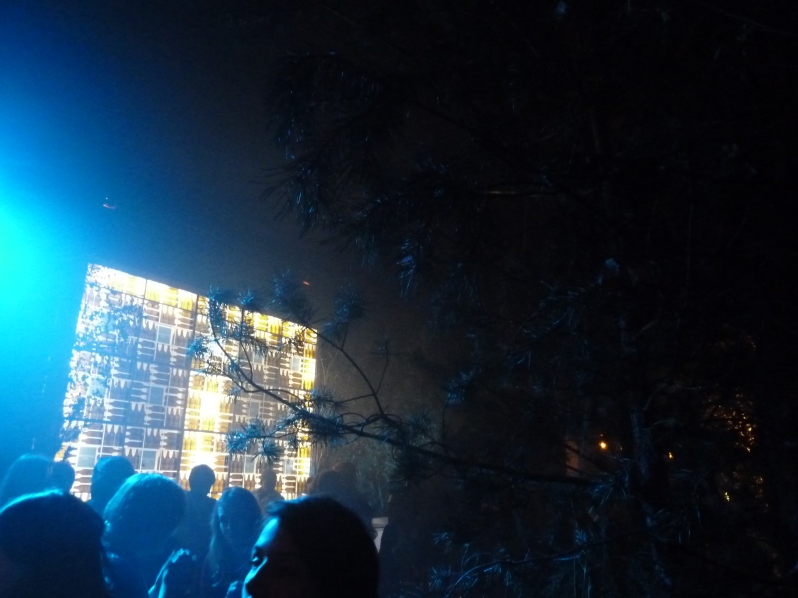 It was worth just turning up because the £5 entry included FOUR cider tasters  and Arctic cheese croquettes topped with cloudberry chutney. My favourite cider had to be the wintery apple, cinnamon and vanilla, which was delicious and had a winning flavour combination.

Not content with my cider and cheese, I sampled three Swedish dishes:

I must confess that I am not a big fan of fish, but this was really tasty. The fishy flavour was toned down by the batter and expertly complimented by the sourness of the pickles and creamy mustard crème fraîche.

This was my first time for trying elk. As it turns out, it’s quite a dense, gamey meat but this was offset nicely by the sweetness of the onions and juniper berries.

How could I not try these? After all, they’re all the Swedes eat, right?!

The meatballs were tasty, although a little dry, but the sauce left me licking the plate. So good.

The only minor problem with the event was the fact I obviously can’t handle alcohol.   I don’t normally drink as I really don’t like the taste, but if the cider was included in the entry, I was going to drink what I’d paid for! So four tasting ciders and a tad more on top was enough to make the world seem hysterically funny. I walked home with my friend, crying with laughter. The pavement is wow! The car…look, it’s in a car park! Haha! My friend, however, had failed to eat dinner and had drunk extra cider. So whilst I laughed myself out, he paced around the block to sober up.

For your information, Norse by Norsewest is part of the Disappearing Dining Club. On every third Saturday of the month, diners can feast on Scandinavian food. For more information, click here. It’s definitely on my “to-eat” list when my budget permits 😉

Also interesting, none of my friends here in Sweden seems to have heard of Rekordelig cider, but they seem very taken with the name, which is an old-fashioned word which roughly translates as trustworthy and reliable.