As mentioned previously, I was lucky enough to win two tickets worth £40 each to Two Nights Only, a burger pop-up dining event. Needless to say, I was VERY EXCITED. Ashamedly, I’d been stuffing myself all day at a food trade fair and was not at all hungry. I cursed myself. This was not a good way to start off. Because this evening was all about gluttony…

We entered the Bedford and Strand restaurant, going down some steps into a dimly lit room, where long tables were laid out for feasting. The element of secrecy hung in the air. We were directed to our seats where personalised paper placemats awaited us.

My placemat read “U winner” and made me very happy, even though they spelt my name wrong.

The table was decked with mini jars of Hoxton pickles to take home and eight poker chips, each representing a drink token for either beer or a rum cocktail (being a non-drinker, I just made towers out of mine because no-one wanted more than eight drinks each!)

It was undoubtedly a pop-up event. Food was served on disposible plates and presented without flourish, but this just made it all the more fun. A secret feasting atmosphere was combined with American diner aesthetics and some whacky presentation.

First up, our starter was buffalo-style chicken kiev, served bizarrely with a single baby sweetcorn that looked a little lost and lonely. I really wanted to stick the sweetcorn into the kiev to make a snowman’s head and nose, but my friend said that that would look like something not quite as innocent as snowman. The kiev itself was very tasty – the chicken was evidently of a good quality and very succulent. This was mixed with some mild spice and blue cheese, and served up in breadcrumbs that were crisp and fresh, and expertly avoided greasiness.

Next, the burger. The Forty Burger as they called it. Yes, it looks gloriously lethal, but we weren’t here for the health benefits.

You can read for yourself what it contained. 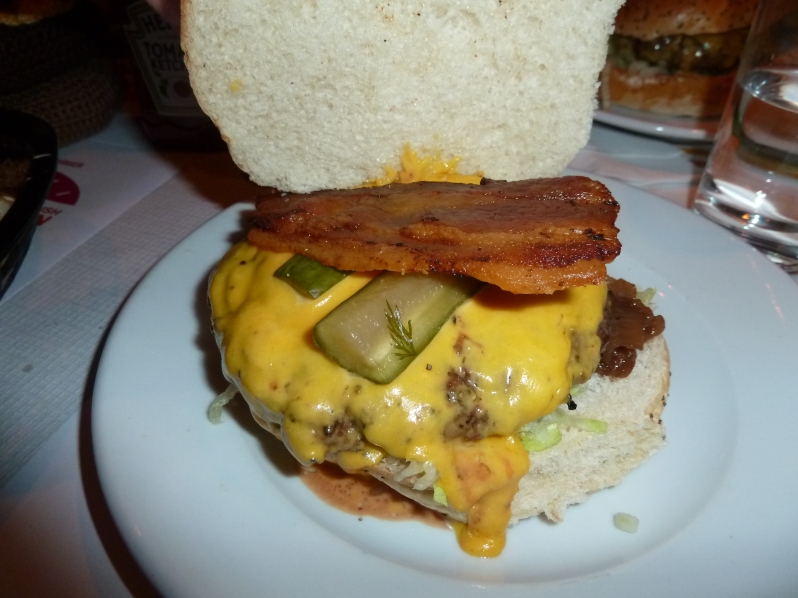 This was a highly enjoyable and extremely messy affair. As with the starters, the quality of the ingredients could not be faulted. I found the patty tasty but a little bit dry for my liking, although this was not a problem with all the cheese and relishes – in fact, the bun disintegrated almost immediately! I found the pickles a little fat – they were exquisitely tangy, but I like my gherkins thinly sliced in order to spread the potency of flavour and to stop them overpowering the other flavours. However, the bacon was to die for – so crispy and so moreish, that I almost started on bacon sandwich fantasies there and then.

We were given a basket of chilli cheese fries. A basket each. Yes, the quantities were ridiculous. The chips were a little light and airy, but the chilli was delicious – very mild but flavoursome, and surpisingly moist given the lack of sauce. The cheese came in a pressurised cannister and sprayed on top. I couldn’t detect any flavour but I was really amused/alarmed by the serving method – apparently it exploded over an unexpecting diner on a neighbouring table!

Yet cheese wasn’t the only thing to explode that evening – and no, I’m not referring to our stomachs from over-eating. We were given garlic mayo in tubes and my friend struggled with opening his, managing to squirt it directly into his eye. Here he is trying to smile while I’m cruelling laughing at his misfortune. I’m a terrible friend.

The garlic mayo came with what was for me the highlight of the meal: an oxtail doughnut, served in a 2NO burger box. It was very slightly sweet and very doughy, filled with savoury meat (that tasted jsut like ordinary beef). This proved the most controversial item of the evening but I loved the sweet/savoury contrast and the texture. It reminded me of kare pan in Japan, a deep-fried curry doughnut, which is a lot greasier and filled with a sweet curry sauce (and is one of my embarrassing guilty pleasures). I managed to blag an extra doughnut to take home, so I was very happy.

Dessert was a KP chocolate dip, which had been altered – salted caramel sauce had been poured into the base of the biscuit tub. I’d never had one of these pots before  but I wasn’t too enamoured with the concept: I didn’t like the biscuits and there was something disturbing about being given a pre-made dessert that had been opened and tampered with. The chocolate and salted caramel were rather yummy, but I was so stuffed at this point that I couldn’t fully appreciate them (alarming, I know – I only refuse chocolate when I’m in a terrible state).

The evening was incredibly fun, and there was a general party atmosphere as everyone cheerfully ploughed their way through the feast. I shall remember it as a night of relaxing, pleasant conversation and increasingly difficult yet determined mouthfuls – no-one wanted to waste such fantastic food.

Two Nights Only deserve a massive congratulations for the effort and imagination that went into the evening, as well as the fine quality of the ingredients used to prepare each dish.

So thank you Two Nights Only for some marvellous meaty mayhem and glorious gluttony.

And thank you again to Hamburger Me for picking me as a winner!