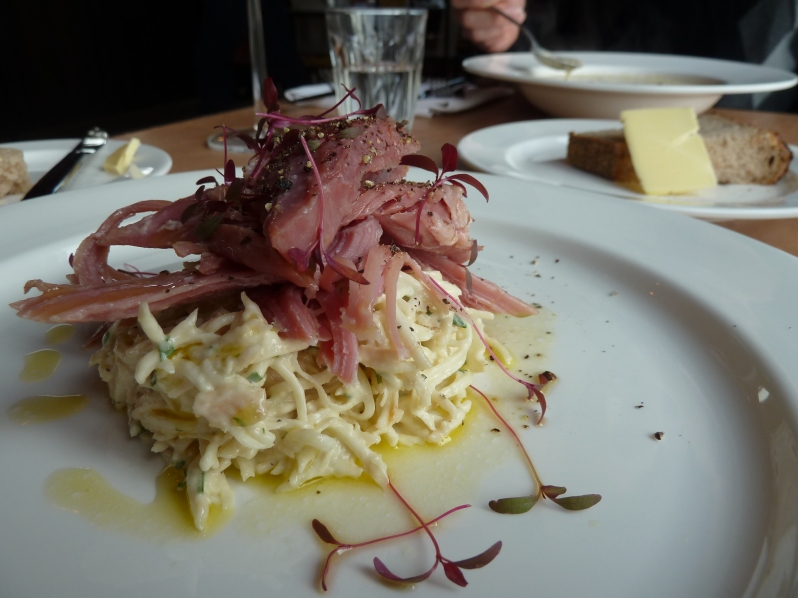 This is the most overdue review ever. So overdue that I lost the menu to quote exact prices. However, you’ll be pleased to know two things:

1) My memory of the food is still fairly fresh;
2) This story involves some Pheebz mayhem/embarrassment.

I was on an adventure to the Rooftop Café near London Bridge with my friend Matteo AKA Sparrow. I’d spied on Twitter that they had recently opened that there was 50% off food until the end of the week.

We arrived at The Exchange and were buzzed inside into what looked like an unfinished office building. We climbed the stairs, growing increasingly perplexed. We arrived at the kitchen. But where was the café? We backtracked down a flight of stairs.

Maybe this small dubious staircase is the way? 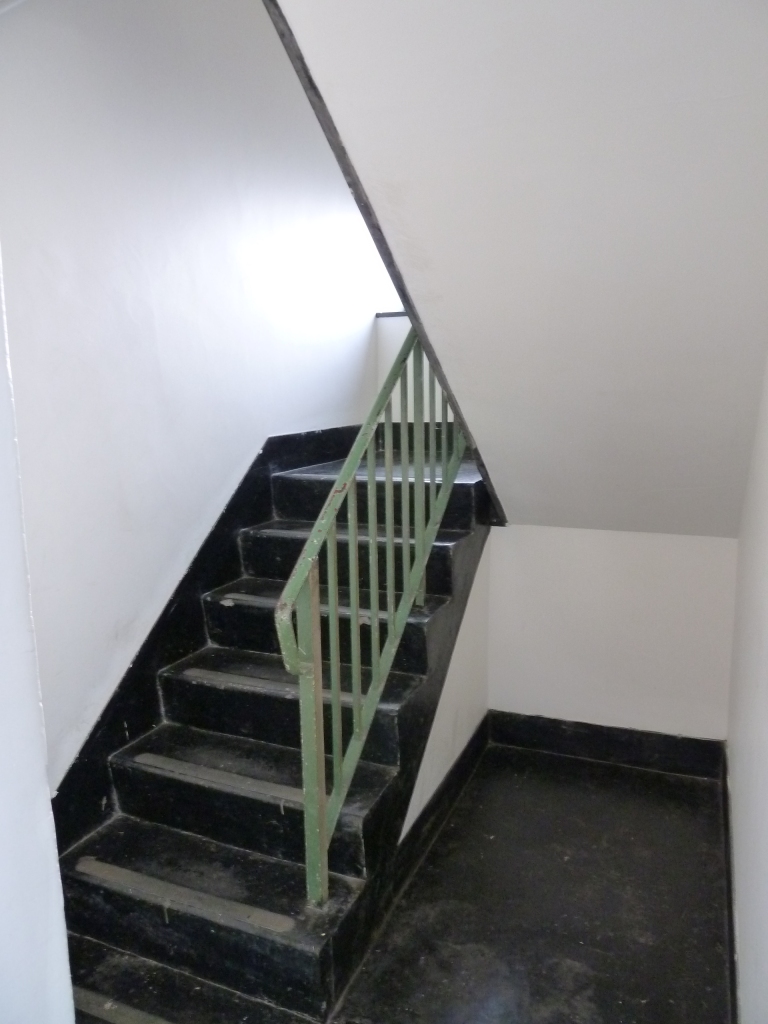 Oh yes, this is the way. We’d missed this subtle sign painted on the window next to it. 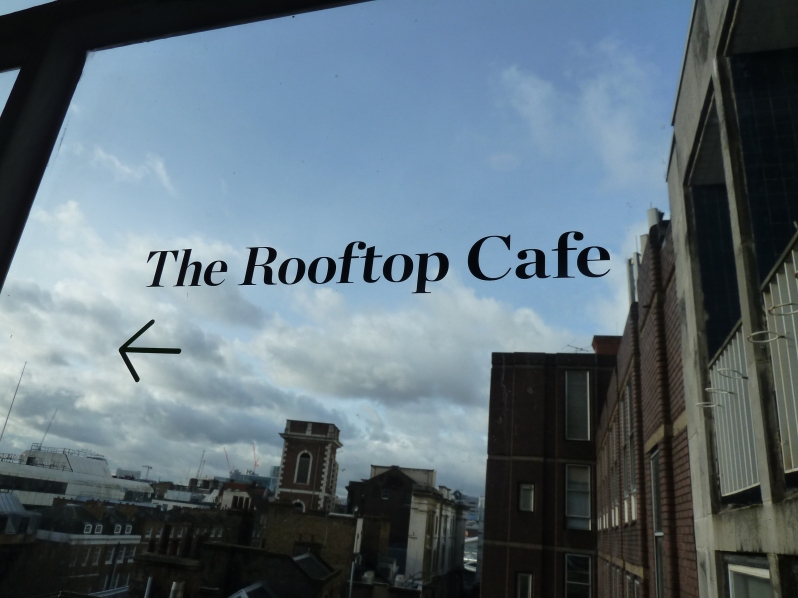 Once we’d managed to locate the actual café, we encountered hiccup number 2.

“No, that ended yesterday.”

Turns out the deal was until the end of January, not the end of the week. Friday was February 1st. For a student, I wanted to hold up a giant sign with #FML scrawled across it.

However, the staff were absolutely wonderful: they took pity on us and honoured the deal. Although the food is not actually very expensive for what it is.

Before I launch into a discussion of the food, the café itself deserves a description. Fortunately, it looks nothing like the narrow staircase which leads to it. Inside is modern and minimalistic – wooden floorboards and a wooden bar contrast against light walls and red and yellow string chairs. If it were a dress code, it would have perfected smart casual. Yet diners probably won’t spend too much time admiring it because… 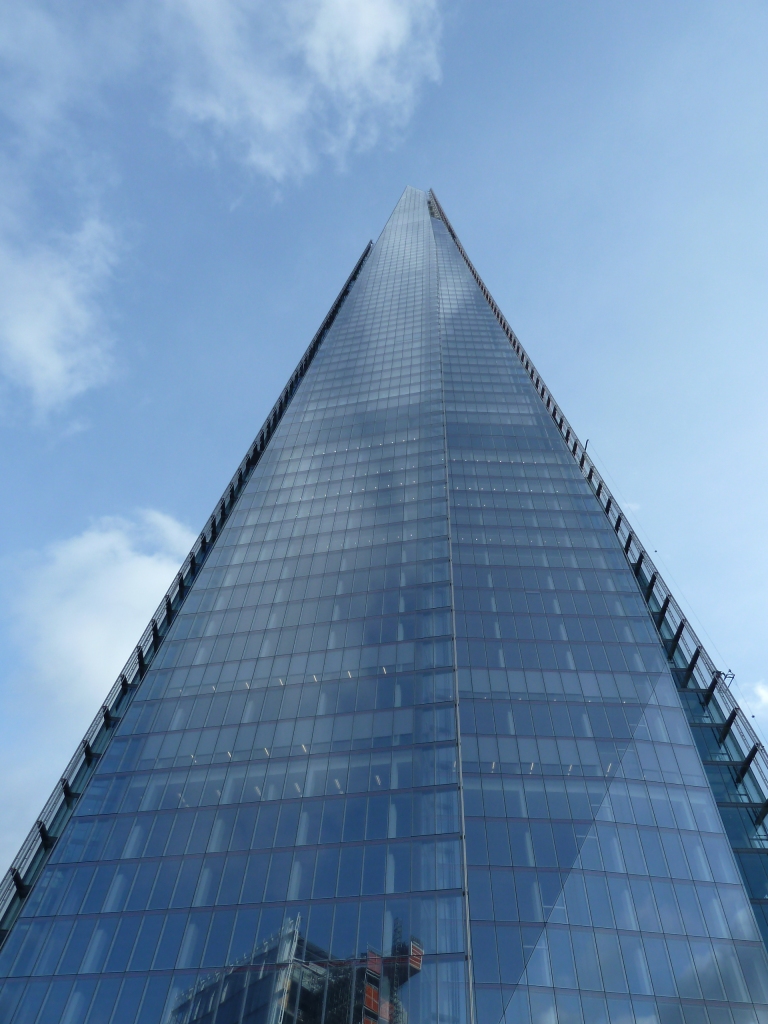 …. the Rooftop Café is at the base of the Shard and has amazing views! 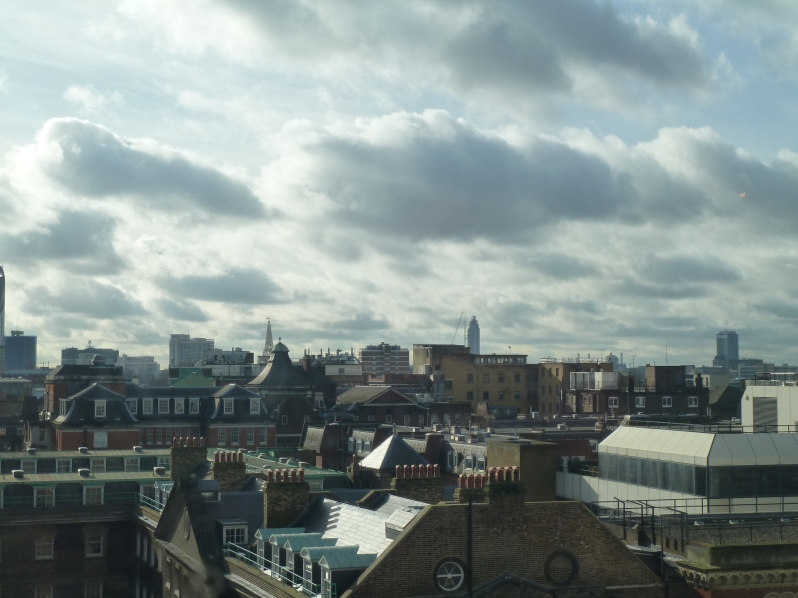 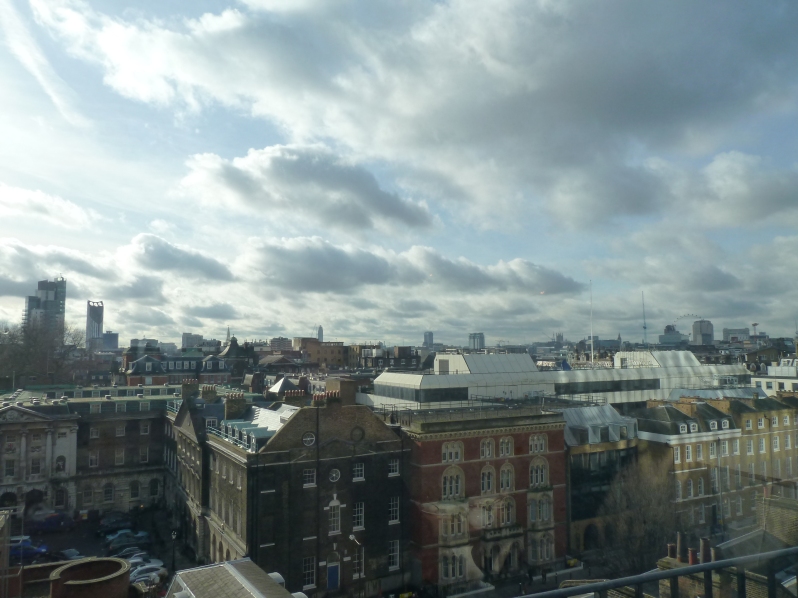 I got chatting with the waitress who explained their plans to build a giant glass conservatory to increase the amount of covers and allow diners an even better view across London.

Once I’d stopped photographing and gawking, I settled down for the food. The waitress very proudly told us that the menu changes daily and they use locally sourced produce where possible. 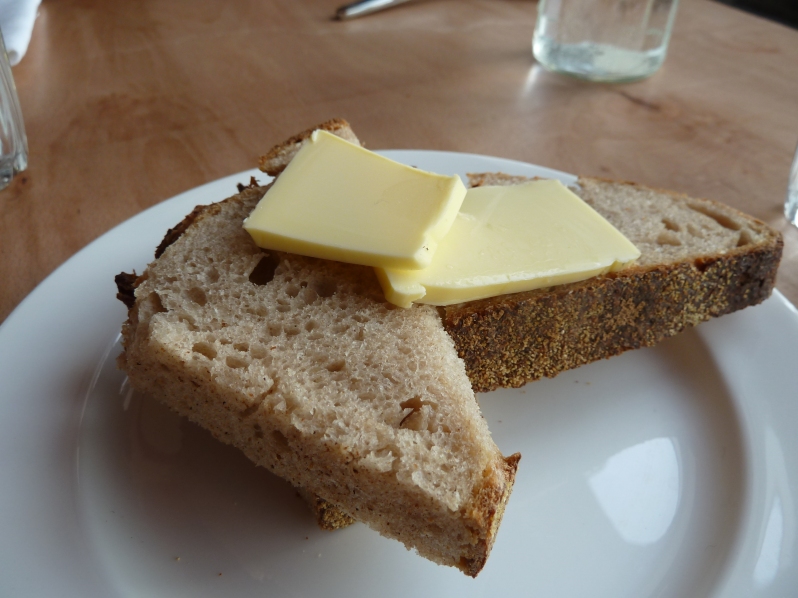 We were given some sourdough bread to peck at. Sourdough seems to be the big rage at the moment. To be honest, I’m not overly fussed about it but if you’re a trendy foodie, by all means, get excited (personally I’m a soda bread fan). 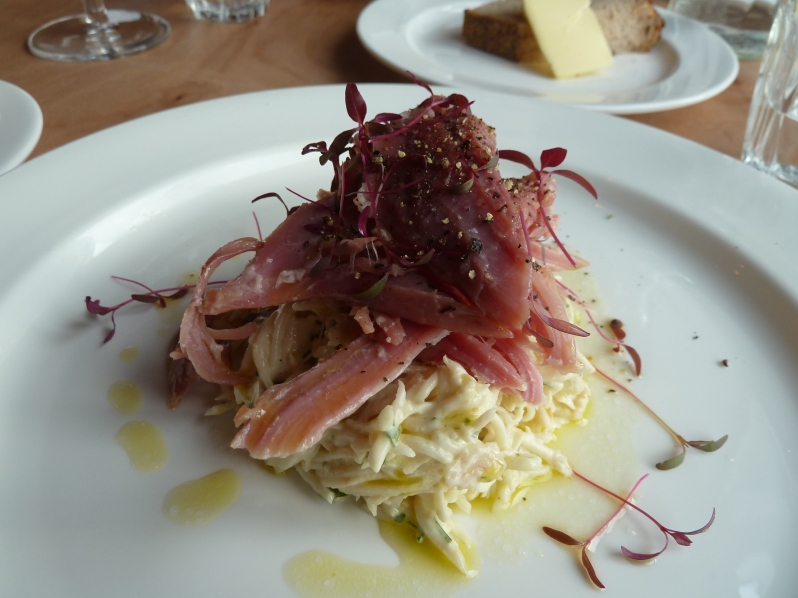 Ham hock with celeriac salad (~£6) (Sorry again all the prices are estimates!)

Beautifully presented and wonderfully textured. It just lacked that flavour oomph that would have made it stand out. I worry that this is because, with changing the menu so often, the chef has less time to perfect flavour combinations. I thought some apple would have made a great addiction to the dish. 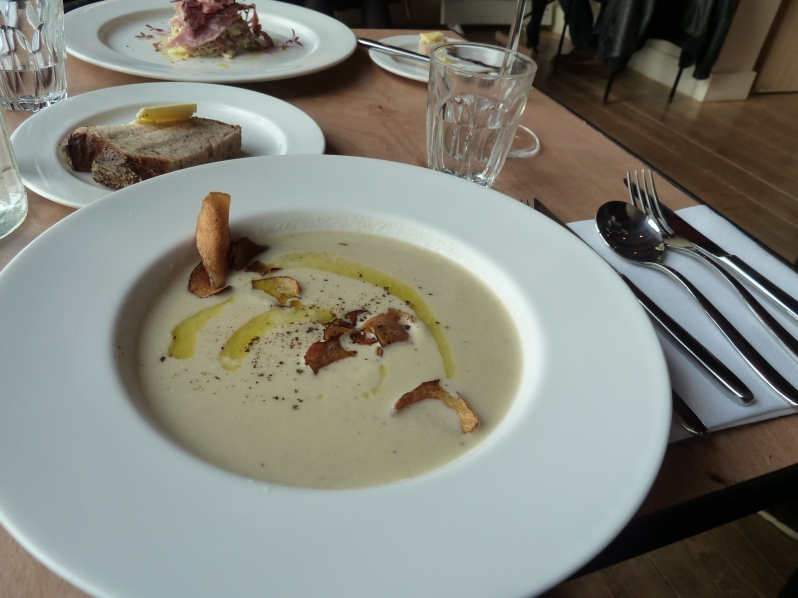 Light, creamy and subtle, with a flavour that grows over time. 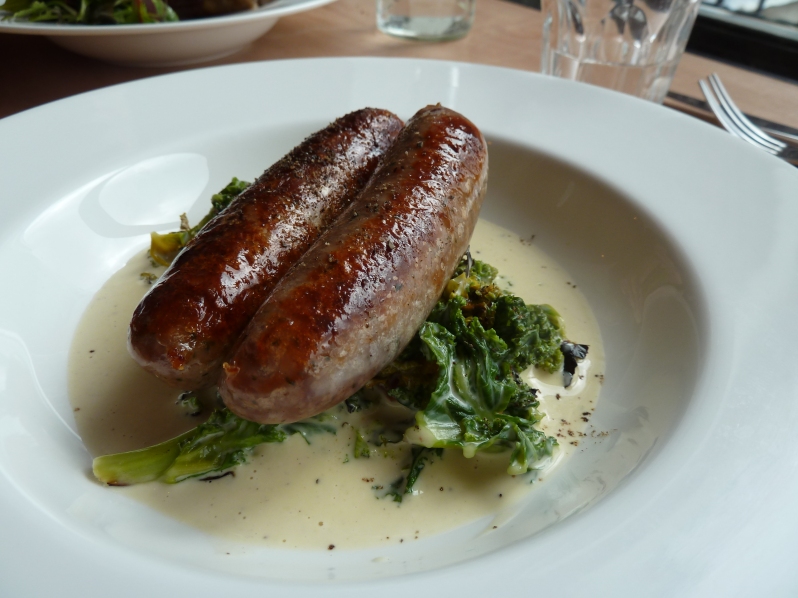 These were good quality sausages, served with a creamy garlic sauce on top of kale. The bitterness counteracted the creaminess and I enjoyed the dish because it was hearty and unpretentious. Again though, it was lacking that spark that made me go “wow”. It felt like a work in progress rather than a finished dish. 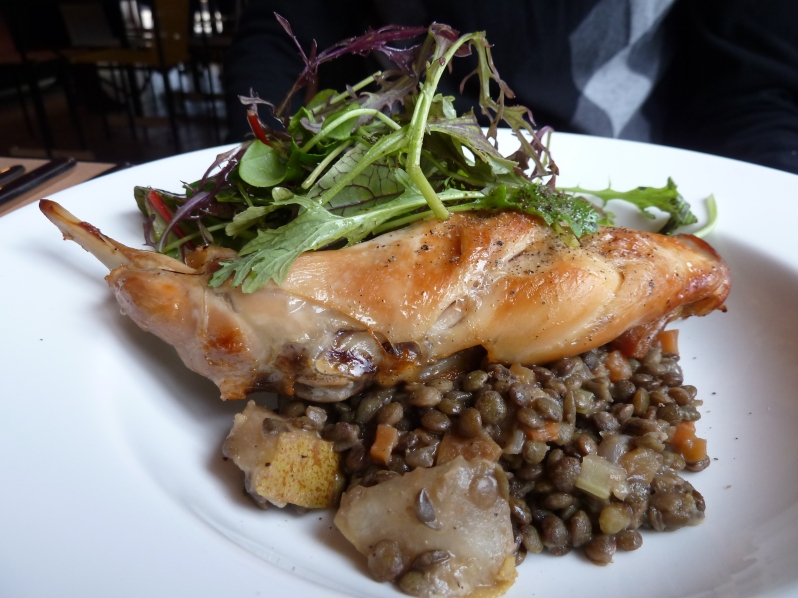 I only sampled a bit of Sparrow’s dish, but the rabbit was pleasingly moist. He was happy anyway.

The style of food is great, the quality is great but the execution isn’t quite there. However, I suspect (hope) that the food has been improving over the time so I’d definitely go back.

Also, visitors should remember that the building is used for other purposes. On leaving, I ran wailing down the stairs in a frenzy of post-food excitement to find myself outside a business meeting with several startled businesspeople gaping at the loony waving her arms around.