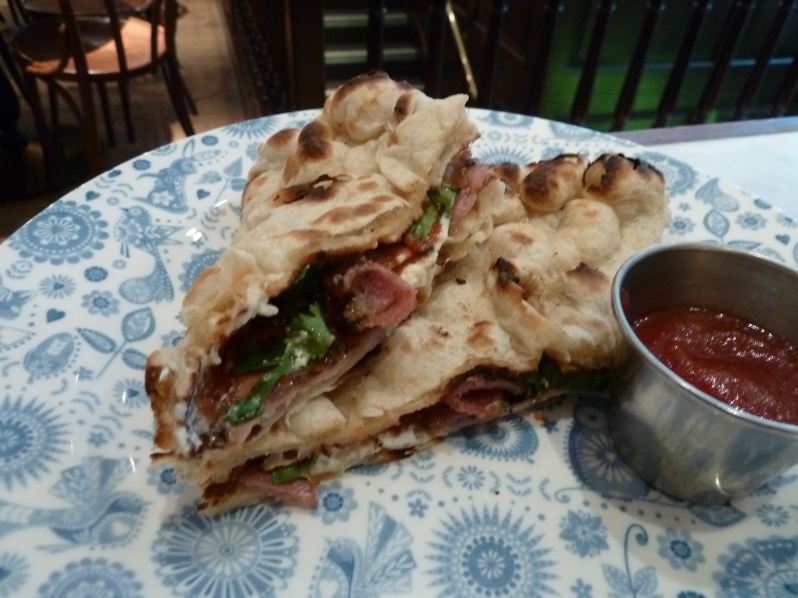 Firstly, I need to apologise for the poor quality of the photos in this post. I promise that Dishoom’s bacon naan roll looks a lot more appetising than depicted here. In general, I’m not a very capable person before I’ve eaten in the morning. I barely managed to cycle to the restaurant without fainting. I’m going to blame it on that. Definitely.

Dishoom calls itself an old Bombay café and I’d heard good things about its breakfast. As my friend was in London town for an interview afternoon, it was the perfect opportunity to meet for a cheap, tasty and slightly unusual brekky to set her up a challenging day.

Having had dinner at Dishoom before, I knew exactly what I’d be drinking – Chocolate Chai (£2.70). To those who are now thinking, “I like chocolate, and I like chai, but together?!“, please trust me on this one. I thought the same but I love it lots – they very skillfully navigate and carve out a perfect middle route between the flavours.

To eat, all three of us ordered the  Bacan Naan Roll (£3.70) which comes with chilli tomato jam, cream cheese and coriander. I met this with some scepticism –  I firmly believe bacon is one of those things that doesn’t need any extra flavours because I want to enjoy all of its salty goodness without interruption. However, Dishoom have really pulled this one off. The chilli jam isn’t too sweet, the coriander provides a tantalising contrast and…well, it’s just awesome.

There was one small problem – my friends and I were less than impressed with its size. Please Dishoom – I think you could fit another rasher of bacon into that naan roll. At £3.70, one could just order two, but I’m going to resent paying £7.40 for bacon and bread, even in London.

Overall though, Dishoom makes for an unsual – and delicious – breakfast.