It’s not been doing too badly of late, but our summer temperatures are never worth shouting about. Let’s be honest – they’re really not much different from Scadinavian summers.

So when there’s such a thing as amazing Swedish cider, why not pretend we’re in Sweden? Yes, that’s a jolly good idea.

In fact… *drum roll*… Kopparberg have got us covered! They are running a pop-up Urban Forest at the Bootstrap Company’s space in Ashwin Street, Dalston. This is East London and so, of course, this event is too cool for school, with live music and street art, as well as food from Fika, the Swedish restaurant on Brick Lane (who, incidentally, do the best semlor in London). It’s open until August 3rd so hurry to check it out!

However, earlier this month, I was hanging out in a different neck of the East London woods.

One evening, I entered a magical Swedish forest that had grown in The Garden of the Hoxton Hotel. Pine branches were scattered around, apples dangled dangerously at head height, the tables were covered in peat and mushrooms. 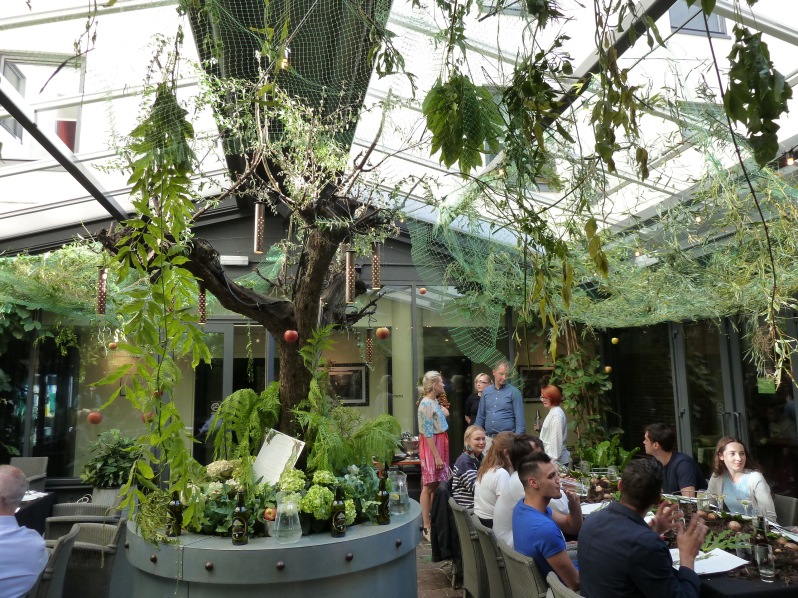 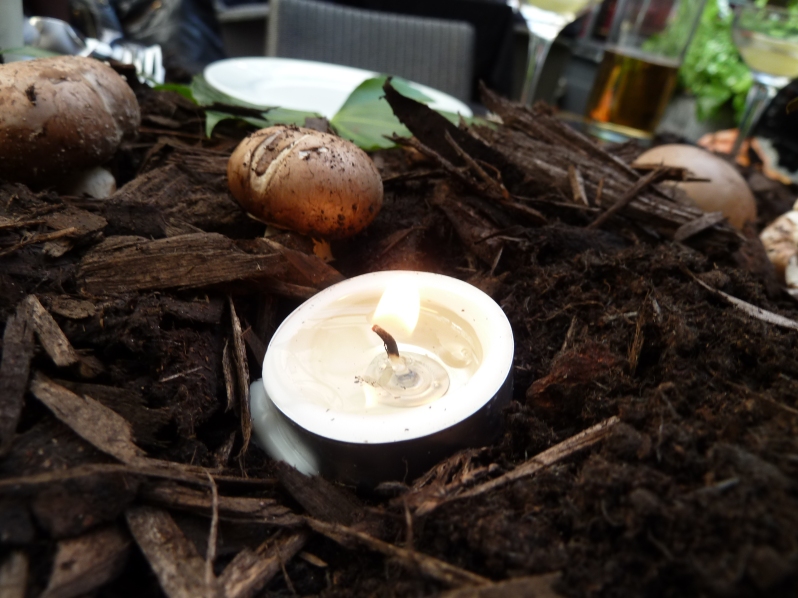 It was a charming and impressive sight – the summer equivalent of visiting Santa’s grotto as a child, where you sort of know it’s all not real but it’s so exciting because it’s different and dazzling and oooooh!

We were immediately greeted by cider balsamic pickled strawberries and Kopparberg martinis. Kopparberg martinis are a really good idea and so easily drinkable that you’ll find that you’ve emptied your glass before you’ve even raised it to shout “skål!” Was it the sounds of the forest being played around us? Was the birdsong subtly encouraging us?

For this was a meal with a twist – a meal that was going to play with our senses. Caroline Hobkinson (Stirring With Knives) had created an experimental menu that was to use sight, sound, smell and touch to influence our taste. Was this the female version of Heston Blumenthal?

Our first course consisted of ‘Dehydrated Mushroom Soup Tea Ceremony with specially made fur lined cups.’ Understandably, given the pop-up nature of the event, these weren’t made with the finest craftsmanship in the world – fake fur was stapled to the outside of the cups and fell off in clumps. I wasn’t sure about the ‘tea ceremony’ part either. But I watched with delight as the servers poured a kind of miso soup over shiitake mushrooms.

Sipping it, I was transported back to Japan and remembered the times when I’d made an udon broth using shiitake mushrooms. This broth was remarkably mellow in its flavour given that miso can be quite sharp and tangy. I later found out that the fur was to make it taste creamier. Could this have accounted for it? Without a control version, I can’t say, but the concept fascinates me. Furthermore, whoever discovered that touching furry things produces a creamy taste? Perhaps someone was once stroking their cat whilst sipping some black coffee and got awfully confused? (I jest but this is something I fully intend to talk to Caroline further about as she’s done a lot of research into this – watch this space!)

Next up was an outside favourite of the evening – ‘fresh pea, mint and dill soup’. Each ingredient was beautifully poised so as to create a smooth yet complex flavour. I never knew pea soup could be this exciting.

But then, the menu announces: BACON SMOKE FILLS THE ROOM! 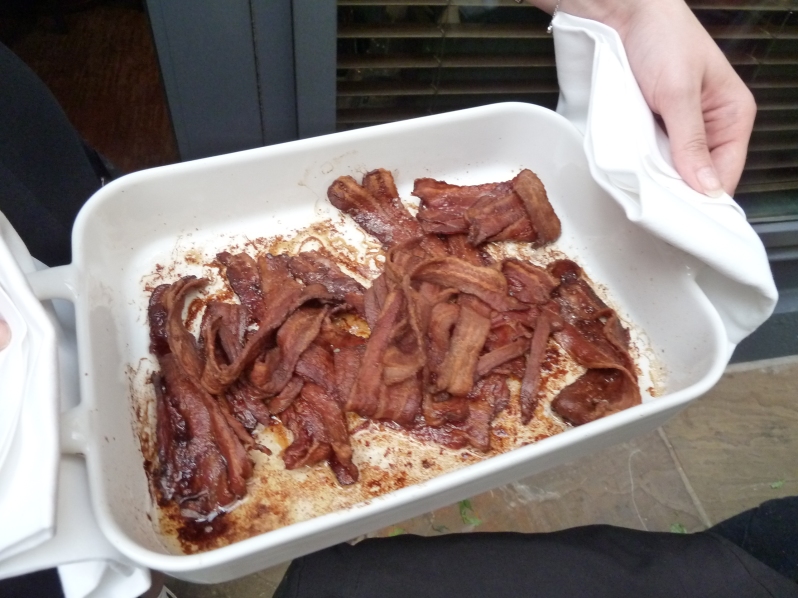 So… the menu may have exaggerated a little. Servers walked in between the table with trays of cooked smoked bacon, encouraging us to inhale its sinfully bacony smell, and laughing as we drooled into our soup bowls. Fortunately, we were permitted to dive in and an ungraceful scene unfolded as people scrabbled at bacon rashers and used them to mop up their soup. A proper feast indeed!

Yet what Swedish dining event would be complete without some salmon? We were served some very fine Hansen & Lydersen salmon with a cloudberry compote.

The next course began with the alarming instructions of ‘please blind yourself’. Was this going to be a version of Dans Le Noir’s dining concept? We affixed blindfolds and enjoyed a very crunchy fresh cucumber ad Kopparberg elderflower granita. I discovered it’s very hard to take photographs when blindfolded…

The fun reached its zenith, however, on the next course with the wild boar and elk meatballs and our ‘custom-made spears’. These were forks, strapped to bamboo sticks, with the intention that we feed each other. Most people were a little reticent but I wasted no time in splattering my long-suffering neighbour Prad with a nice tomato sauce.

You know when I mentioned childhood excitement at Santa’s grotto? Take that excitement and multiply it by four. Spears brought out my inner savage 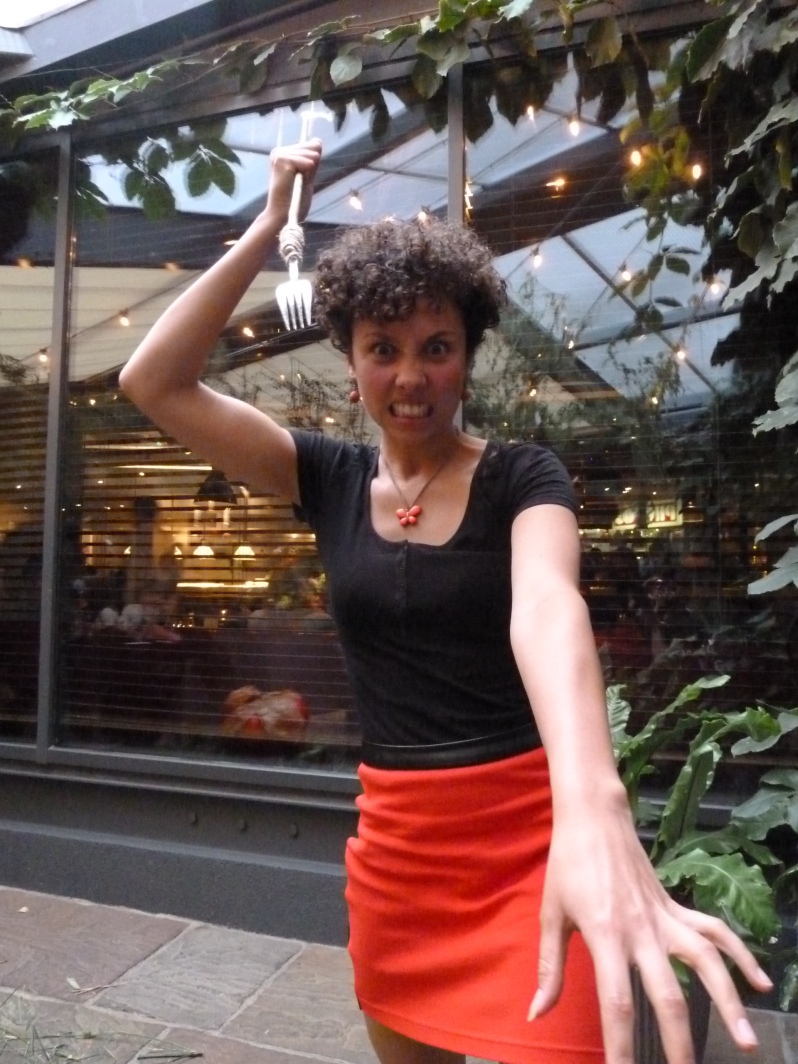 We were then served a ‘midsummer strawberry compote’, which was more like a drink, followed by a Kladkakka chocolate mud cake, whilst listening to high and low frequencies. The sounds were supposed to alter the taste between bitter and sweet but the room was quite noisy and I didn’t notice any difference – this is definitely something to be further experimented with!

Accompanying our meal were the two new flavours Kopparberg Cloudberry and Kopparberg Elderflower and Lime (RSP £2.29). Both are very light and smooth with a refreshing summery fruitiness, but I was definitely a cloudberry fan. I’m pretty sure that I wouldn’t recognise cloudberries growing on a bush but I can now recognise them in my cider. I feel prepared for life in Sweden. 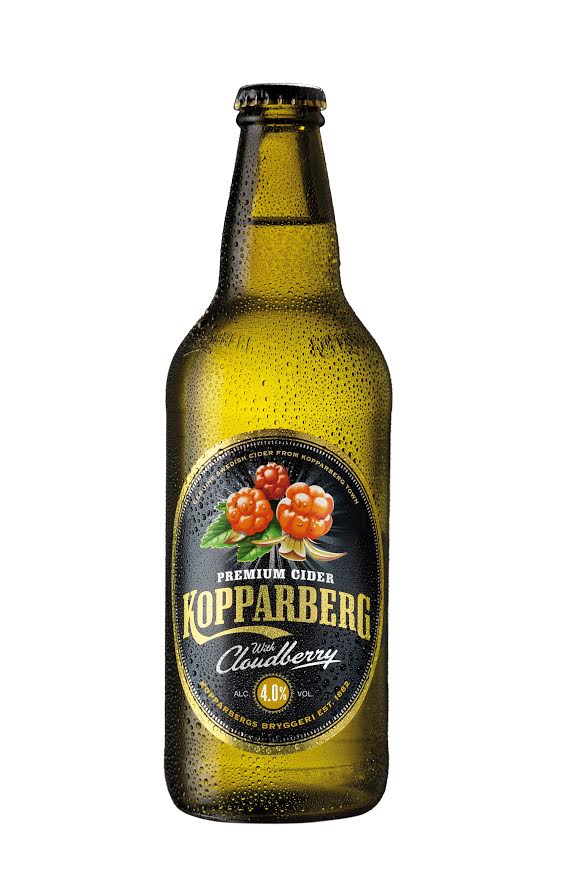 Spears or none, this evening was ridiculously fun and quite thought-provoking too – how does our environment influence the way we enjoy food? I don’t know… so I should probably drink some more cider and check out that Urban Forest.

Thanks to W Communications for the invite!