If you’re a foodie, you know you’ve made a good friend when your dining companion pulls out a notebook and starts rating dishes and writing comments. As a food blogger, I was half-filled with shame and half-filled with admiration.

How did I come to meet such a food-obsessed dining companion? The moral of the story is to always say YES.

I’m a YES person – so despite the fact that I have an exam this week and next, on Saturday I said YES to cooking class and YES to double portions. I said YES to a meat festival with a friend straight after cooking class. And through said friend, I was introduced me to ramen critic, whom I shall call Mu.

The meat festival was inevitably crowded on a Saturday night and everywhere we tried proved to be full. We ended up eating a chorizo-inspired hot dog topped with sauerkraut from an equally nationality-confused bar called Iron Horse. Needless to say, it was probably the dirtiest thing I’ve eaten in a while – but when you’re that hungry, it was like a sausage from heaven (I’m sure heaven must have sausages or it wouldn’t be heaven. And bacon, it must have bacon). 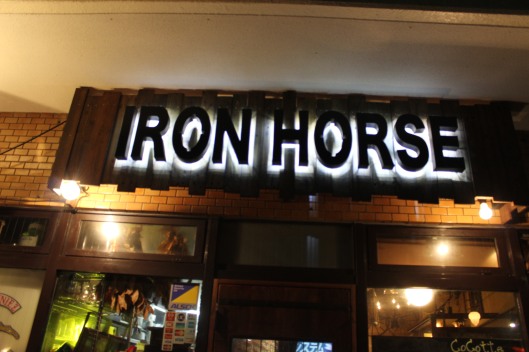 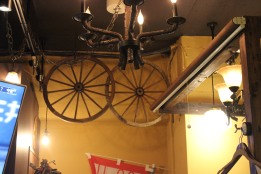 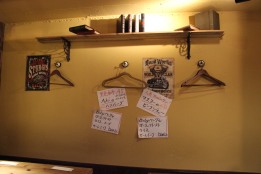 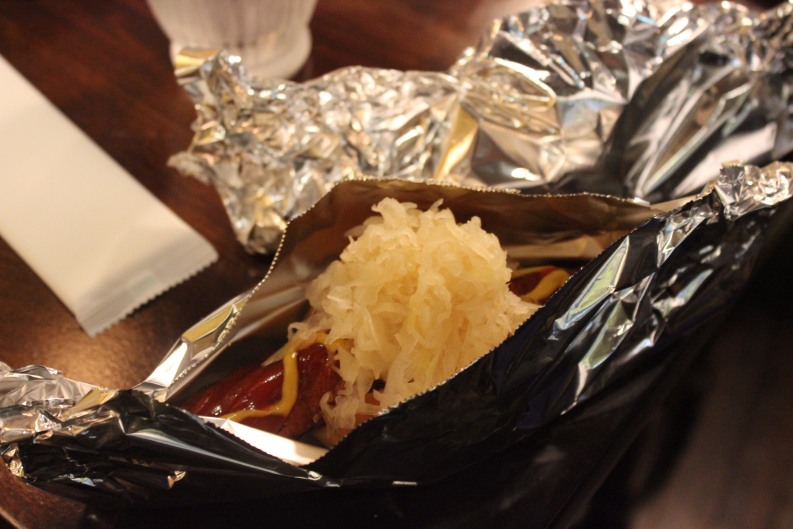 Fortunately, despite our brush with the Germanic Hells Angels with Spanish & Italian predilections, we had a plan: Tokyo Ramen Show 2014. Held in Komazawa Olympic Park, twenty ramen restaurants from around Japan set up shop and advertise their finest noodles.

Ramen is an import from China that has become firmly entrenched in Japanese cuisine. Thin noodles are served in meat (or, very occasionally fish) broth, which comes in several varieties:

Whilst entrance is free, you need to buy ramen tickets to sample the dishes. These cost 850 yen a bowl and can be bought at convenience stores in advance or from ticket booths on arrival. Once armed with these little enablers, head to the ramen stalls for your noodle fix, where you can also order and pay for extra toppings, such as nitamago (boiled egg) and extra chashu (pork). 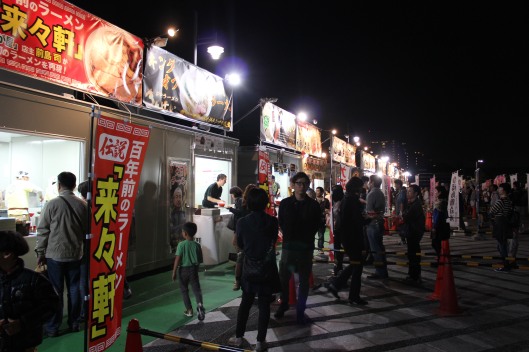 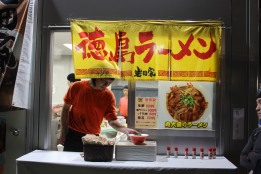 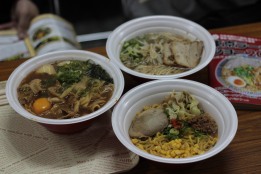 There are many people in Japan who are so passionate about ramen that it is almost like a religion. And after working my way through six bowls at the festival, I’m beginning to see why. We sampled bowl after bowl from different regions, each made with care and pride. We even got to see ramen being set on fire!

Thus, without further ado, I present you with the lowdown on the contenders! Mu wrote comments as we went along; my comments are on reflection. The ratings are as follows: 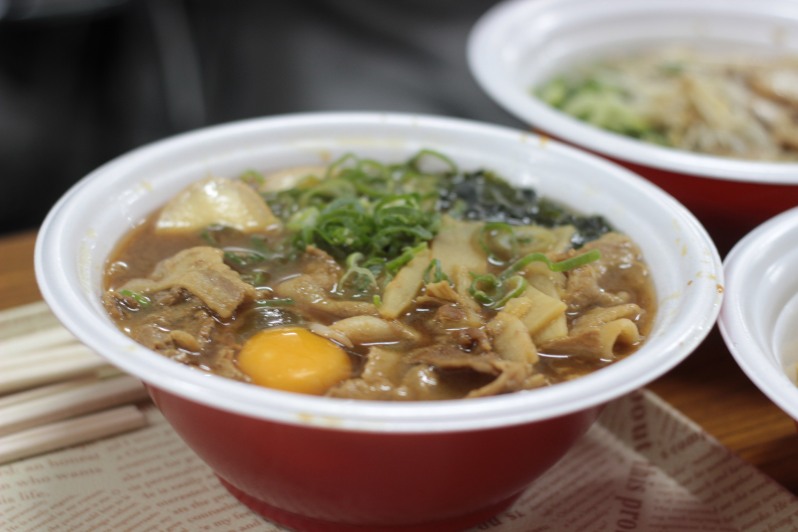 Mu: Sukiyaki taste – tonkotsu ramen.  The broth is mixture of pork born and pork back ribs flavored sooty-sweet. The taste is changed after addition  “low egg” for topping.

Me: I gave this ramen a noticeably lower score, mainly because I got a bit annoyed with it – so I think I was probably a little harsh. For me, the flavour of the broth wasn’t strong enough and I found the pork to be underwhelming – no gooey fat melting into the mouth. It’s actually perfectly fine, but I wouldn’t order it again. 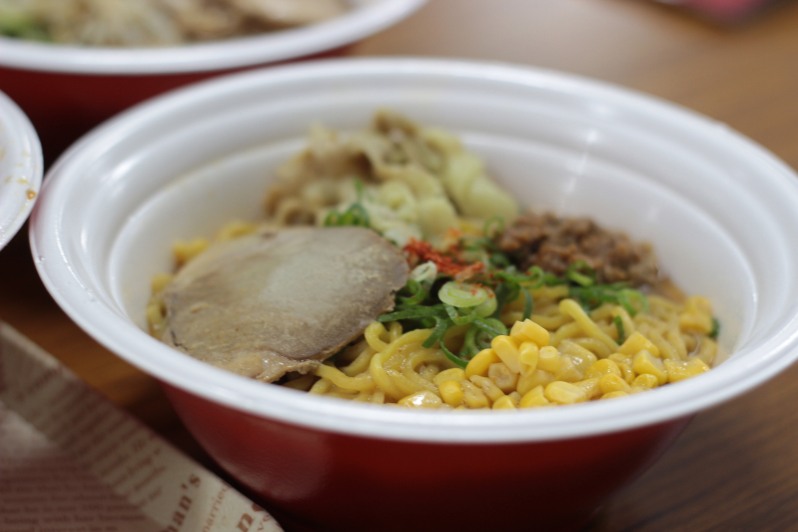 Mu:  The broth has a rich miso taste with tonkotsu. I think this is too strong.

Me: This tastes straight like instant noodles out a packet – it activated vague memories from when, age 11, I bought my first (and hopefully) last Pot Noodle. So if you like that nice artificial flavour, this is for you. It’s made by a corporation rather than a restaurant so no surprises! 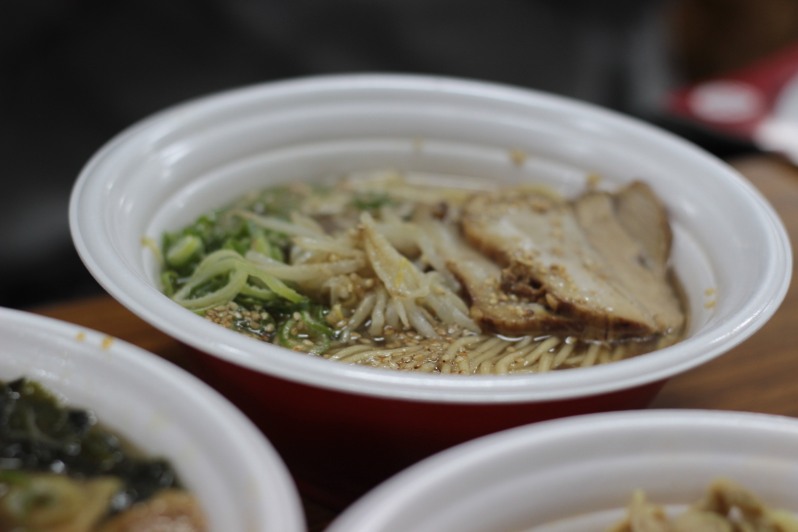 Me: Tonkotsu ramen is my absolute favourite. I originally thought the broth of this was a little too light, but the pork is melt-in-the-mouth delicious, the noodles were pleasantly firm, and I just thought the whole dish came together rather successfully. 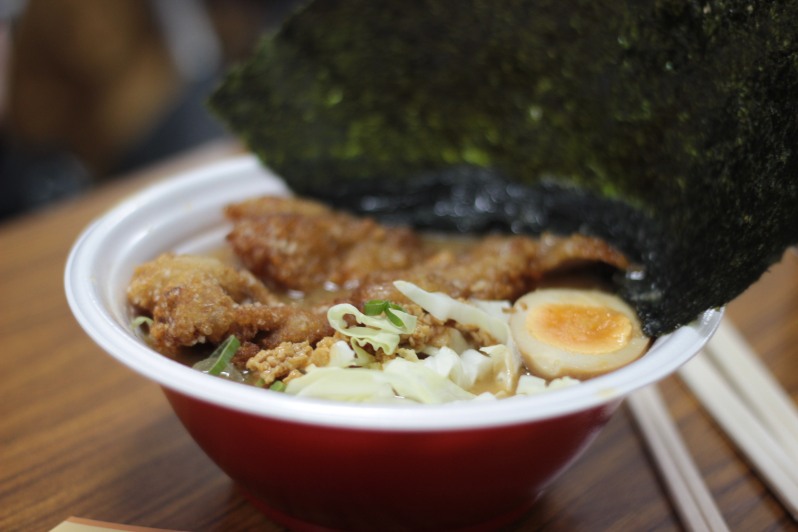 Mu: The broth is MISO with milk. “Sanzoku-yaki”, which is big fried chicken,  is put on the ramen.

Me: That was some succulent fried chicken! But the broth was a catastrophe. The miso and the garlic were fighting for attention and my tongue just recoiled in confusion. 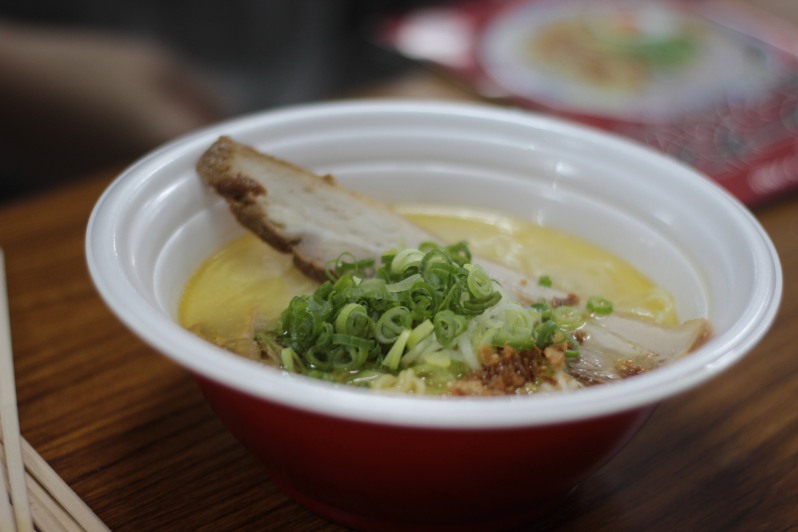 Mu: The broth is pure chicken. I think it’s ramen with a light taste but not too light. おいしい！(Delicious!)

Me: The topping was nothing to write home about but the broth was tasty – it just lacked a certain oomph in my opinion. 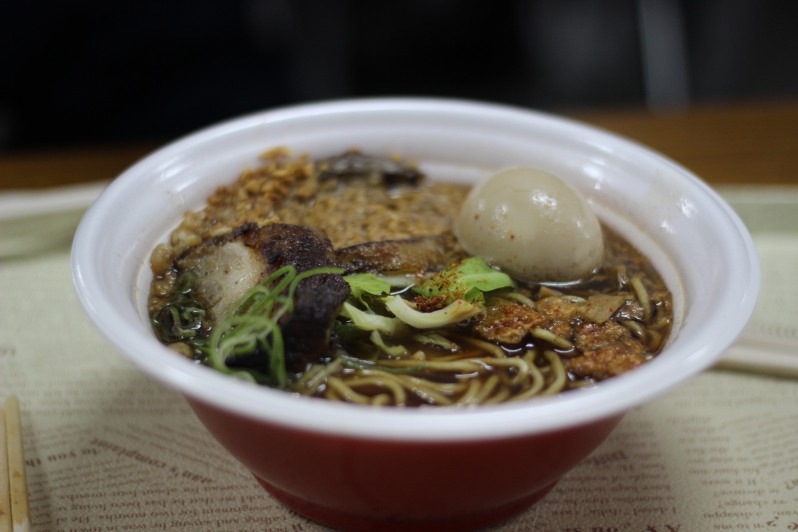 Mu: The broth is burned soy sauce. The performance with big fire at the finish of cooking is impressive!

Me: Yes, the setting it on fire is really impressive. I just sneakily revised my score up from 7 to 7.5. Every single ingredient in this ramen is delicious as the smoky, burned soy taste gives everything a lovely flavour. The trouble is that it’s so potent that it becomes overpowering. I found the broth to be undrinkable after just a few sips and I’m a ramen broth drinker – so for me, this ramen requires a different approach: you have to go for the dip and slurp, rather than the slurp and glug! 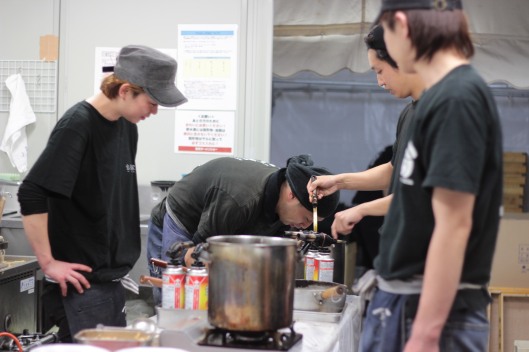 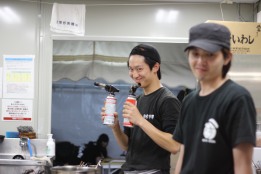 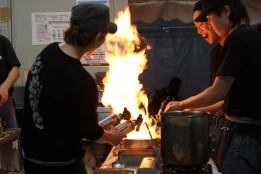 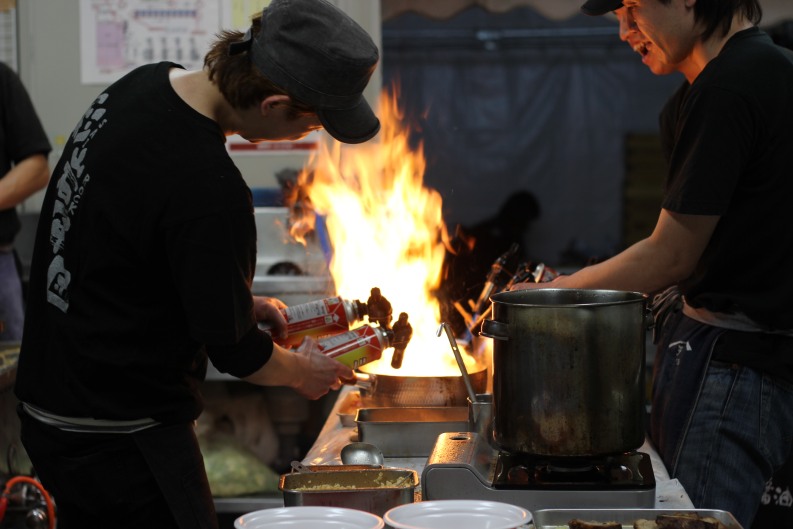 The winner, then, is the all chicken broth ramen Fukuoka Pai-Tan-Men from Fukuoka! Fukuoka is considered the birth place of Japanese tonkotsu ramen so it’s interesting to see it’s living up to it’s reputation here but evolving away from the traditional pork broth.

For dessert, there was Gari Gari Kun – this cheerful cartoon boy who brings you ice lollies on sticks! I got the milk and azuki bean flavour one – which was like a Japanese Mini Milk (remember those, kids?) and was nowhere near as sickly and artificial as I thought it’d be! And once you have consumed the vast quantities of salt – as is inevitable when it comes to ramen – you’ll really, really, appreciate something sweet!

Round Two of the Ramen Festival begins tomorrow, with 20 different traders tending to your noodly needs. Don’t miss out.