On getting to film the chocolate ramen at the fabulous Mensho Tokyo at Korakuen, I discovered that there were quite a few restaurants in the Menya Shono group…. all with very intriguing menus.

If that’s not a decadent approach to tsukemen, I don’t know what is.

At it happens, I’m a much greater fan of tsukemen than ramen. I love the thicker, chewier noodles and dipping them in a thicker, richer broth. Even in winter, I enjoy the temperature contrast of cool noodles and hot broth. 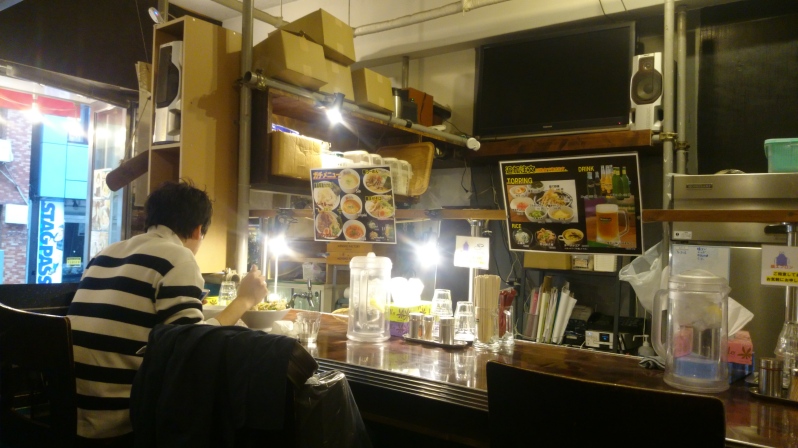 I first ate at Gachi over a year ago when searching for some noodles to introduce to a friend who was visiting from Bangladesh. And in the past three weeks, I’ve been back twice. Why? Because it’s red( (spicy) chicken dipping broth called to me. As did the fried chicken. And the boiled eggs with gooey centre.

Gachi has a rather ramshackle appearance ,with boxes and barrels and a rather eclectic selection of items inside, including a rather fantastic “Gachi it is” Michael Jackson poster. 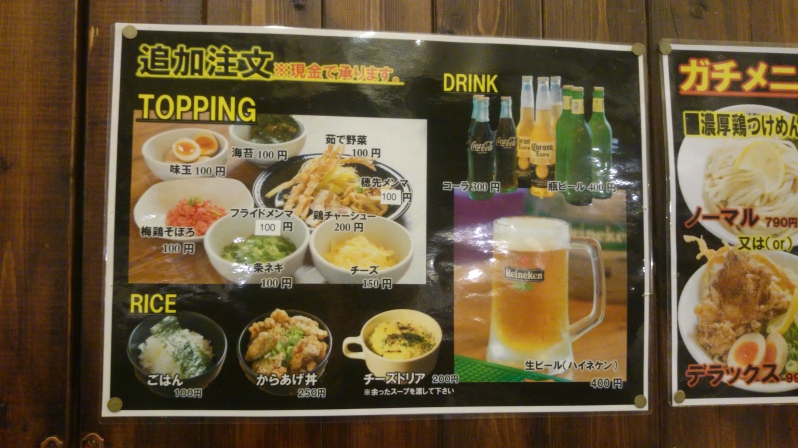 The signature tsukemen costs 790 yen for “normal” which basically means noodles with lemon, nori and the dipping broth, although should you wish to make a custom bowl, you can order toppings separately as you desire.

The “deluxe” is 990 yen and absolutely worth it – it comes with a deboned, rolled flat chicken thigh in delicious peppery batter, deep-fried bamboo shoots, seasoned egg, spring onions, and, of course, nori and lemon.

As for the chicken broth for dipping, there are three kinds: salt, teriyaki and red (spicy). I would like to be able to tell you about all three but my spice addition means I may have only tried one of the three. I can confirm is not that spicy but warming and the dried chopped chillies on top can add a good kick to a mouthful.

You buy your ticket from the machine and hand it into a member of staff who will then ask you to choose the size of your noodles: small (nami), medium (chū) and large (ōmori). The noodles are all made in-house and if you’re lucky you might see a crate of uncooked ones, all neatly divided into weighed portions, passing through to the kitchen.

The noodles themselves are very thick and springy and I may or may not have managed to ping them and fling broth straight in my eye. I absolutely love their texture, despite mild optical disasters.

The fried chicken on top is moisture and the peppery batter has so much flavour that I actually eat half of it with just lemon juice on top – and then only lightly dip the second half in the broth.

As for the seasoned egg, I save this to eat with the tender chunks of pork hidden in the broth and add a couple of noodles for the perfect mouthful (in my opinion… not that I obsessively plan my mouthfuls. Um, nope, not at all). 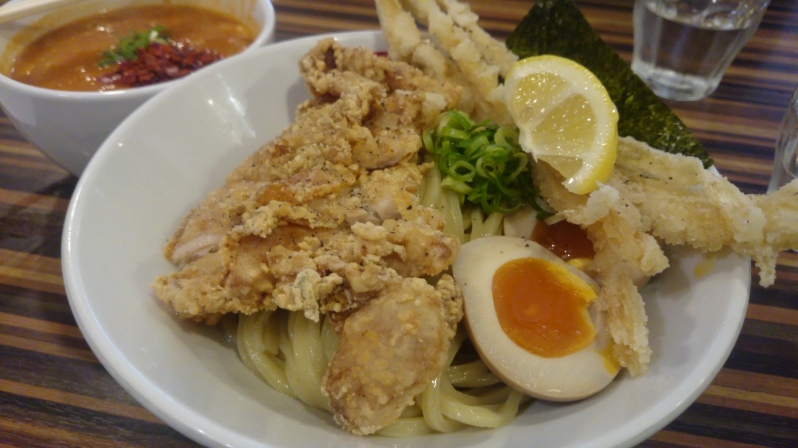 The broth itself seems to vary. Today’s broth was a lot more acidic and salty than last time, and whilst still worthy of downing in its entirety, it didn’t quite match up to a couple of weeks back, which was mellow and smooth in the way the flavours blended together.

The other point to note is that the nori does not go AT ALL with the red broth or the other ingredients. Maybe it works with the other broths though…

On a final note, I have noticed that they do a chicken ramen that looks really delicious. I plan to enjoy this and order a doria rice (rice with cheese on top) for 200 yen to mix in at the end. Please expect an update.

Nichome Tsukemen Gachi 4/5 The broth is variable but the noodles and overall quality of ingredients are hard to beat!