I want to be Italian. I hated potatoes as a kid and was fed endless amounts of pasta as a result. Italian food is wonderful.  And Italians know just how to make the ingredients sing. I swear they whisper seductions to ingredients until the food has no choice but to make love to your tastebuds.

I also have an Italian surname. Amoroso. I’m just meant to be Italian.

So did I want to crash the Italian Women’s Association in Tokyo’s special seven-course Kobe beef lunch at a top restaurant? Yes.

Did I end up eating beef from the top 1.8% of Tajima cows in Japan? Why yes.

Did I get to manhandle Kobe beef fat and watch it melt in my palm? Why yes.

The lunch itself wasn’t exclusively for the Italian Women’s Association. The event was actually suggested Alice Gordenker, who is a journalist, tour guide and long-term resident of Japan. Clearly, she is also a foodie and that is always good.

She was to guide us through the history of Kobe beef, whilst we tucked into seven course meal prepared by Chef Maeda at Kobe Beef Kaiseki 511 in Akasaka. Things were immediately looking promising when upon the table in front of me there was document on the table entitled “Alice’s Kobe Beef Map.”

Alice has a really broad and in-depth understanding of many aspects of Japan, and what’s more, she is a great public speaker. Rather fortunate really, when you consider that she was competing with some very prime quality beef on the plates in front of us. But her silence as she ate was as much a testament to her enjoyment of the food as her impeccable sensitivity to timing as our food guide.

I may be a greedy glutton, but I also like to feast on facts, nibble on knowledge, and so I devoured her every word. Here is a little of what she told us (hopefully without errors)…

Kobe beef comes from Tajima cows which are bred on the island of Awajishima and raised on feeding farms in the nearby Hyogo prefecture, which is where you’ll find Kobe.

Although there are several high-quality types of beef to be found in Japan, Kobe beef became the most famous due to Kobe’s role as a port. Japan was not a very foreigner friendly country (ie. almost completely closed to foreigners) prior to 1853 when Americans turned up with ships and guns and politely insisted. They settled in Yokohama, near Tokyo and were dismayed that they couldn’t get Western food, namely BEEF. The Japanese just didn’t eat cows. So, after some undoubtedly intense discussions, beef was shipped from Kobe and it built up a reputation from there. Ta-dah! Kobe beef!

It didn’t become the brand that it is today until 1983 when the Kobe Beef Marketing and Distribution Promotion Association was established to regulate production. Now any restaurant wanting to serve Kobe beef must be certified. It must have this statue of a golden cow. And, if asked, the restaurant must be able to produce and individual certification number for the carcass that they are slicing up on the plate. Last year, they introduced a new identification mark, using a stylised chrsyanthium, the Japanese national flower, as a symbol. Take a look here. 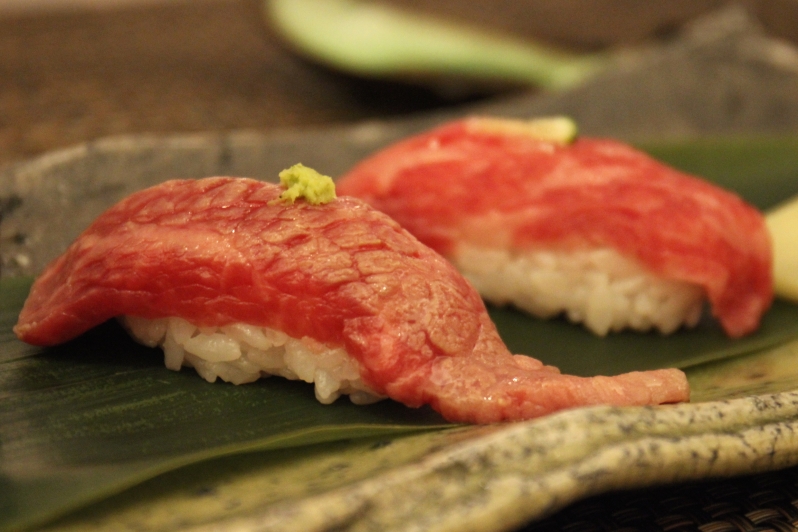 So what exactly is Kobe beef? It comes from Tajima cows who must be under 470kg when slaughtered at the age of 31 to 32 months. They must also be female virgins or castrated males. No teenage sluts allowed.

The carcasses are then inspected for meat quality and standard of beef marbling. Only those making the grade will be certified as Kobe beef – the rest are stuck with the label plain old Tajima.

How is the quality of the beef determined? There sadly weren’t any beef certification experts around to ask, but I like to imagine a bunch of frowning, bespectacled men waving geiger counter-like contraptions over carcasses known as gyu-counters (gyu is cow in Japanese). The gyu-counter moos loudly when a fine specimen has been located.

Sadly, these wonderful imaginings are definitely not true. Just like the stories about Kobe beef coming from cows who are massaged daily and given beer… these are also complete bullshit, if you’re excuse the pun. The offending video which has led to the widespread and persistent myths may have been shot in China, but it certainly isn’t Japan.

These rumours don’t go down particularly well in the industry. Farmers are understandably extremely proud of their cows, given the special care that goes into the breeding and raising. Only Tajima cows can become Kobe beef, which means the bloodline is fiercely protected. Furthermore, there is a strong belief in environmental factors – such as climate and feed – so don’t think you can take a Tajima out of Hyogo prefecture and get yourself some Kobe beef elsewhere.

What makes Kobe beef so tasty? It’s mainly down to the shimofuri – the fat marbling. It has a melting point of 18°C, which is of course lower than the human body. It is this characteristic which makes really good beef melt in the mouth, although in truth this has only happened properly for one piece of beef I ate in Japan, and it wasn’t from Kobe! It is also high in oleic acids, which are also found in high concentrations in chocolate and olive oil, two more of my favourite things. Did I mention I want to become Italian?

Chef Maeda brought us out a square of fat to demonstrate the melting point. He said he didn’t want us to get our hands dirty and that was like red rag to a bull, the bull being me… I immediately volunteered my hand for some dirtying. The fat become translucent as it melted. I kind of wanted to lick it. I managed to refrain. 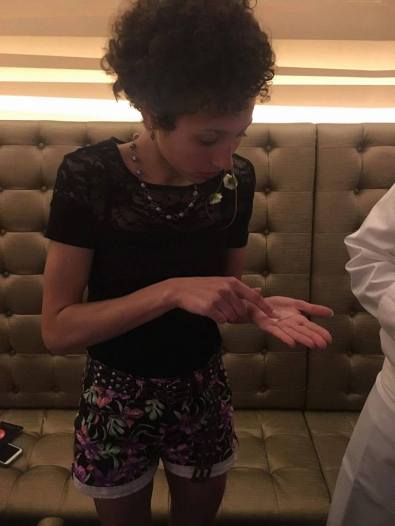 If you want to know more about Kobe beef, and where you yourself can lick some, and preferably ingest some too, then visit the website Kobe Niku. It has a list of shops/restaurants worldwide that serve and/or supply.

In thee meantime, please enjoy my smug memories of what it readily on offer in Tokyo. Before Alice had even finished our introduction to Kobe beef, the first course was before us… 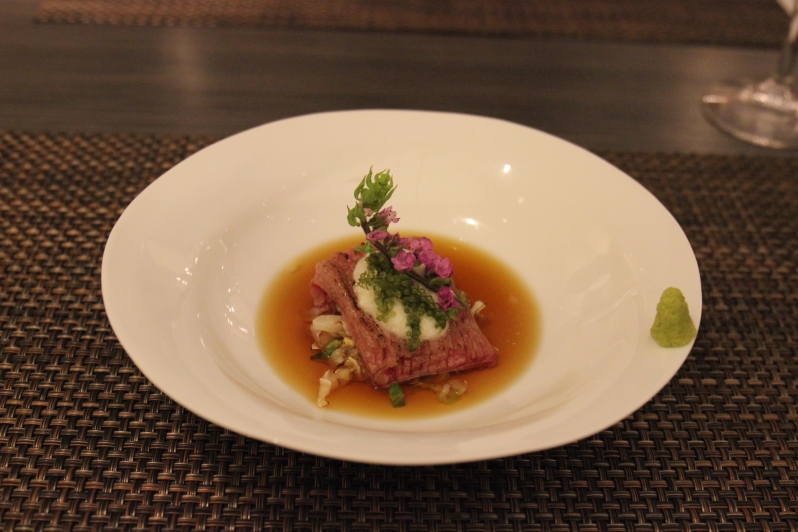 Brisket beef (kuri) wrapped in cabbage topped with mountain potato and sea grapes. And some perilla flowers – completely edible. Light, fragrant and the perfect introduction to the meal.

This was a beautifully presented trio of dishes. To the left, pak choi (shirona), topped with grilled egg (yes, grilled); to the middle, a turban shell; and to the right, seri (Japanese parsley?) in sweet soy, with pine nuts, and rolled beef, and some little chunks of beef, outer thigh meat. Guess which of the three was my favourite, on the right side of my tastes?

Take the Kobe out of this title and I thought I could be back in northern Europe! Except when the dish arrived, it was an unmistakably Japanese take on things. Rib beef – absolutely delicious rib beef – was placed upon a potato dumpling in a light bonito soup, which could then be mixed with wasabi. This was an umami-heaven course. 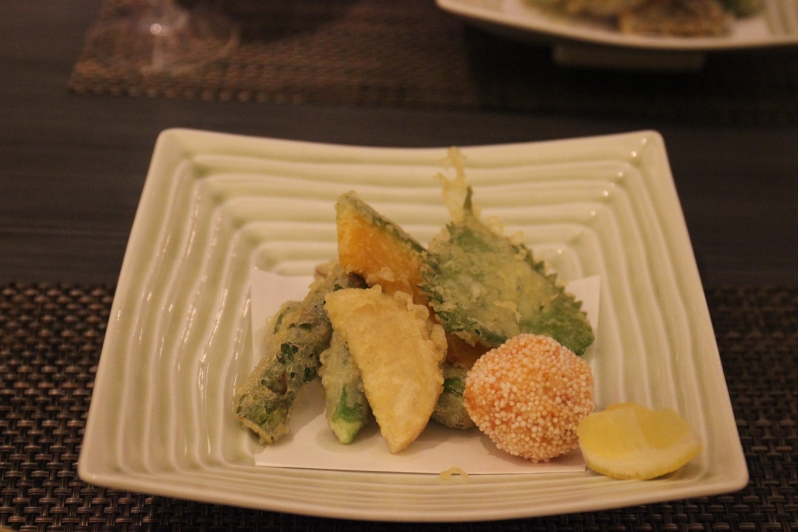 Tempura is very often pleasing but quite rarely great, even at high-end places. However, Chef Maeda pulled off tempura with amazing sensitivity. The flavour of each vegetable was distinct and supported rather than overwhelmed by the batter. I alternated between the soy dipping sauce with grated daikon and plain salt. The sesame-coated shrimp ball stuffed with shank beef was universally popular but, for me, I was serenaded by a simple asparagus.

The pièce de résistance! The beef itself. Baked in a 1000°C stone oven with a fast fan to create convectio. Seared on the outside, rare in the middle with glistening lines visible on close inspection where the fat had melted into the meat.

This was meat quality 5 (out of 5) and beef marbling standard (BMS) 11 out of 12. That puts the piece of beef on my plate before me in the top 1.8% of Tajima cows. Only 4 cows a month meet this standard.

And one of them met my face.

This was a very silent course. Respect, reverence, revelry – or all three – the enjoyment of this beef was a memorable occasion.

However, I must confess, tender though it was, it didn’t actually melt in my mouth. I have only had beef that actually did that once. Although that was in Japan, it wasn’t Kobe beef. I’m so sorry, my darling Tajima moo-moos, you have been upstaged by some barbaric Kyushuites from the Takachiho region!

Our beef was accompanied by soy sauce mousse known as awajōyu (泡醤油）(literally: bubble soy sauce), which is made by adding gelatine and cooling the mixture.

“That’s so Kyoto!” remarked Alice. Kyotoites wore very expensive kimono with long sleeves in great danger of accidentally getting a soy-sauce dipping during a meal, and so the mousse was created to cunningly avoid this problem. I found the taste quite assertively salty and preferred to eat the beef with just the tiniest smear of wasabi instead, before finishing off the course with a refreshing mustard dressing salad. 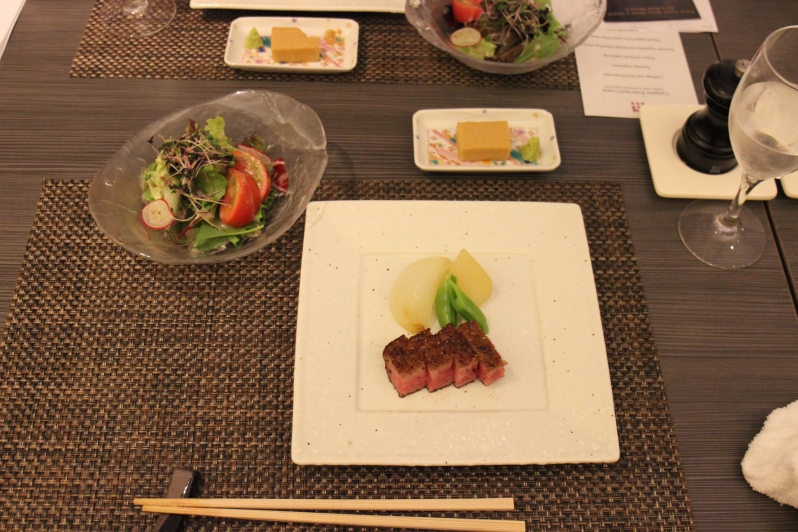 I exchanged meaningful eyes with my friend Bianca. We had been waiting for this. Beef sushi is such a treat – the umami beef with soy and wasabi supported by the sweet and textured sushi rice. I want to write it a haiku. 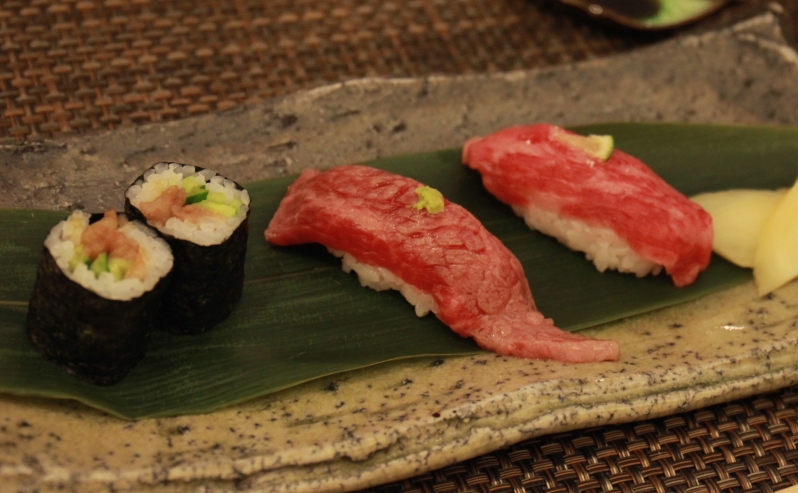 To the left, short rib maki (roll) with a light kalbi (Korea sweet BBQ sauce) flavouring (a little too light for me); in the middle, top round beef to be dipped in soy; to the right, top rib boiled and ready-seasoned (this seemed to be the favourite).

As is traditional in kaiseki (a multi-course meal featuring many small dishes), the carbohydrate comes before dessert and is often served with miso soup. We had a robust yet not-too-salty red hatcho miso.

What do you do when you’re making a meal for a lot of Italians? Could you possibly ignore their fantastic culinary tradition? Chef Maeda clearly thought not and made the ultimate tribute…

Yes, please recover your lower jaw and reunite it with the rest of your face. How could no-one have thought of replacing the bitter espresso that is poured on top of vanilla ice-cream with bitter, thick matcha? I don’t know how it never occurred to me before but I felt as if I had just witnessed a sugary revolution. Just like affogato is a coffee float with more ice-cream that drink, this dessert was a matcha float in dessert. Brilliant. 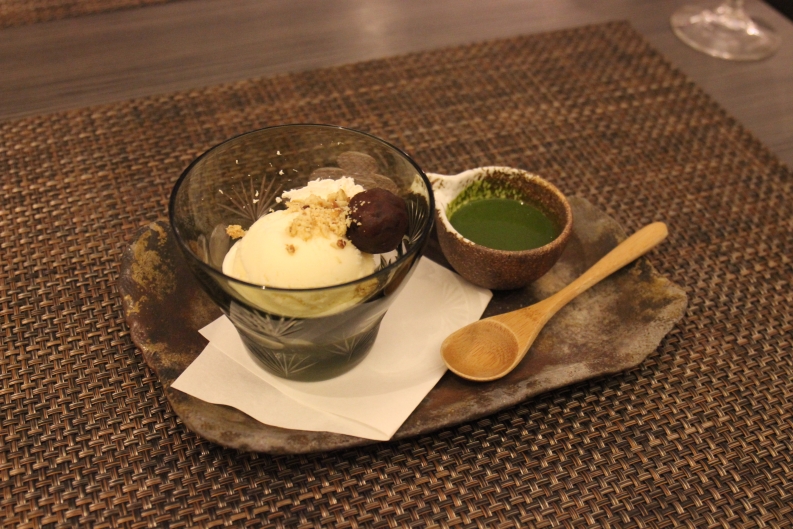 Don’t worry caffeine lovers, we finished up with a cup of coffee too. After all, I was surrounded with Italians, desperately wanting to be be Italian. I drank my cup with enthusiasm, although I’m pretty certain that it wasn’t quite Italian coffee.

Coffee is traditionally served in Japan with the handle pointing to the left, despite the fact that the majority of people are right-handed. And if you want to know why, you are going to have to read Alice Gordenker’s fantastic article on the matter.

In the meantime, I’m just going to keep pretending to be Italian. Maybe more luxury beef and affogatos will fall into my lap.