I’ve had several requests and so here it is… I present to you the return of the Pheebz in Japan blog, added as a new category to Pheebz Eatz (because occasionally I do things other than eat, rare though that is… And to reassure you, there are lots of food pics and info below). I am lucky enough to have been awarded a Daiwa Scholarship and so I will be spending the next 19 months studying and working in Japan.

My arrival in Japan didn’t go quite as smoothly as I had hoped. I travel a lot and seem to be searched more often than not. Today’s searching was on the UK side, however, as security told me my pots of jewellery in my rucksack were too dense to show up on the Xray, which led to the tedious incident of tiny pots of (junk) jewellery being opened and examined with care. On arriving in Dubai over the summer, security saw fit to pull me aside and search my belongings (presumably for drugs), which entailed waving my knickers in the air. I wish I were joking.

I’ve never been searched on arriving in Japan (hurrah). Yesterday’s arrival instead heralded my unfortunately ‘talent’ for breaking machines with my mere presence. As I’ll be living in Japan for the forthcoming year and a half, I need a residence card but the little printer just couldn’t handle my beautiful picture. The immigration officer spent a good 10 minutes or more trying to coax it back to life. Finally, it coughed, spluttered and popped a Phoebe card out.

“Yaaaaay!” shouted both the immigration officer and I (or he said the equivalent Japanese interjection). I then started applauding and he followed suit as we had our own mini-celebration.

Next challenge was to get all my stuff to the hotel in central Tokyo. I had two suitcases, weighing over 41 kg in total, a rucksack approaching 12 kg or more, and a DSLR. The other scholars were similarly laden, with one scholar – a furniture designer – carrying a large cardboard box containing a chair. We were struggling our way to the Keisei Skyliner, when a Japanese TV crew, keen to understand us mysterious foreigners, asked to interview us, and were fascinated by the range of backgrounds we all come from (there are six of us and our fields include: academia, engineering, furniture design, journalism, education and video game design). The interlude made us feel better about narrowly missing the first departing train.

On arriving at Ueno, we decided to get a taxi and played real life Tetris. This involved tessellating various suitcases into the back of unreasonably small taxis. Liam and I failed the first level – the taxi was too small and the driver sped away. Finally, we loaded our stuff into one taxi and set off.

The journey, of course, could not be without incident. The driver had failed to shut his door properly – it swung wide open and spilled all his files and folders into the middle of the road. He had to brake and make a mad dash to collect them.

Next event of the day – welcome to Japan sushi! But I have a terrible confession: I have always hated fish. During previous stays in Japan, I forced myself to eat it – and also had no choice when I was teaching in Japanese schools. So when the scholars jumped at the chance to eat sushi, I nonchalantly though “Oh yeah, this is my chance to FINALLY like it! I was getting to be a pro when I was last here.”

I was out of practice and gagged in front of our host. I believe ‘mortification’ is a suitable word.

In the evening, we went out in Shibuya with our sempai, the scholars the year above us, who took us to Shibuya.

We ventured to an izakaya – a kind of Japanese pub which serves tapas-style dishes.

I love izakaya food as it often involves a lot more meat than Japanese food and stronger flavours to complement the booze. This one apparently specialised in Kyushu cuisine – the southern part of Japan – where in the Kagoshima region, there are black pigs (incidentally, something found on the menu in Jeju, an island south of Korea).

As to what we actually ate,  I was a little confused as different stories went round the table. People seemed to think they’d ordered black chicken but these chewy items were probably from a pig, and most probably its intestines. They actually tasted great but this wasn’t enough to counterbalance the effort put into the mastication process.

Also on the menu was:

The evening concluded with some karaoke. I leave you with this lovely sign: 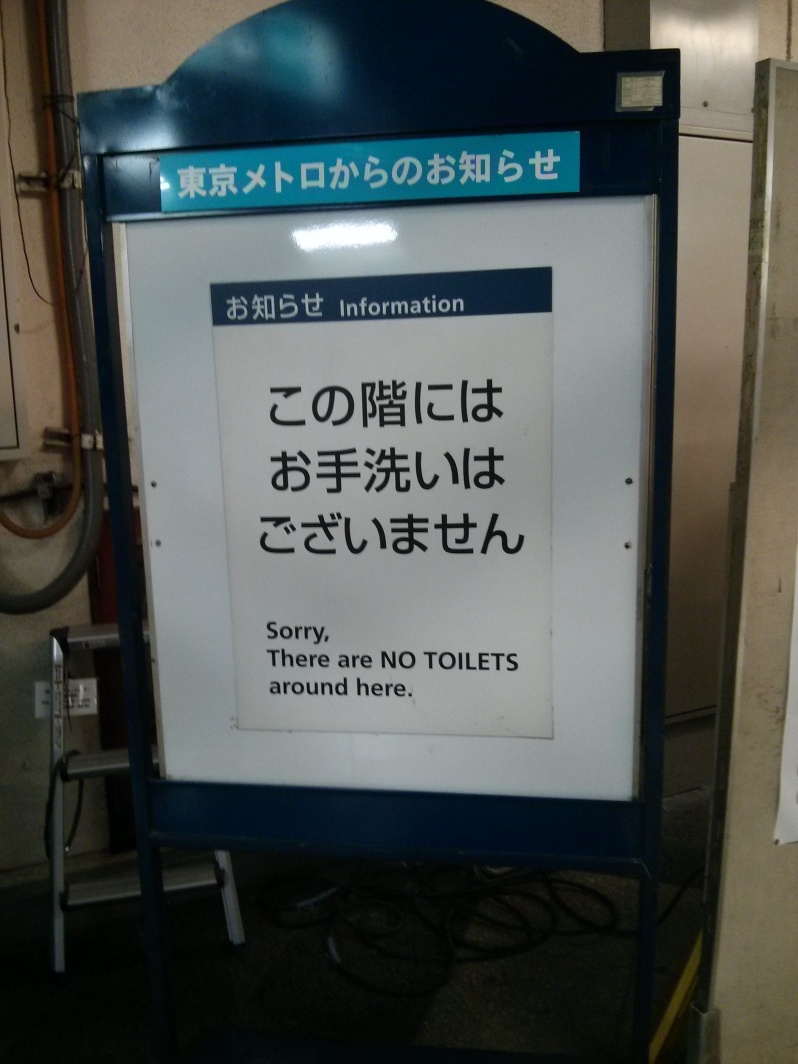