I love adventures but sometimes I feel that I am a stranger in my flat, because I am home so infrequently. This weekend, I would’ve maybe tried to take it easy (I can hear my friends’ laughter echo as I write this….) but I had to catch a train to somewhere. Yes, had to. Let me explain…

A Seishun 18 Kippu is a ticket which buys you five days of unlimited travel on JR lines (but not on limited express services or bullet trains) f0r 11,850 yen. Which means, if you make a journey costing more than 2370 yen in a day, you save with this ticket.

Today was the very last day I could use my last journey. Not feeling too adventurous, I picked the middle-sized city of Takasaki in Gunma prefecture because there were a couple of nice temples and a giant Goddess of Mercy statue and it would only take me just over two hours on local trains.

The trouble is I woke up exhausted and extra hungry and forgot that Takasaki is not Tokyo. Which means one should always check the bus timetable. Arriving at Takasaki station, instead of immediately checking the bus to the big Goddess of Mercy, I did the only sensible thing a sleep-addled and feeble Phoebe – hunted down the nearest Tully’s and glugged down a cafe latte with great satisfaction.

Satisfaction which evaporated when I found out I had just missed a bus and they only come once an hour.

Yet maybe this was the Goddess’ way of showing me some mercy because now I had the perfect excuse for an early lunch.

So that’s why I found myself queuing alone at 10.57am outside Daidarabou (大大坊).

I eagerly eyed up the menu and the ticket vending machine. The soy sauce flavour looked great but I’m a miso addict. So I got the special miso ramen (all the toppings) for 950 yen plus 50 yen for the lowest level of spice. It was hot and early and I wasn’t feeling brave enough to choose the “thunder” level. The man (possibly the shop owner) was more than happy to advise me and point out the buttons. If he was surprised to see a foreign girl with giant flowers in her hair queueing alone before 11am on a Saturday morning, he certainly didn’t show it! 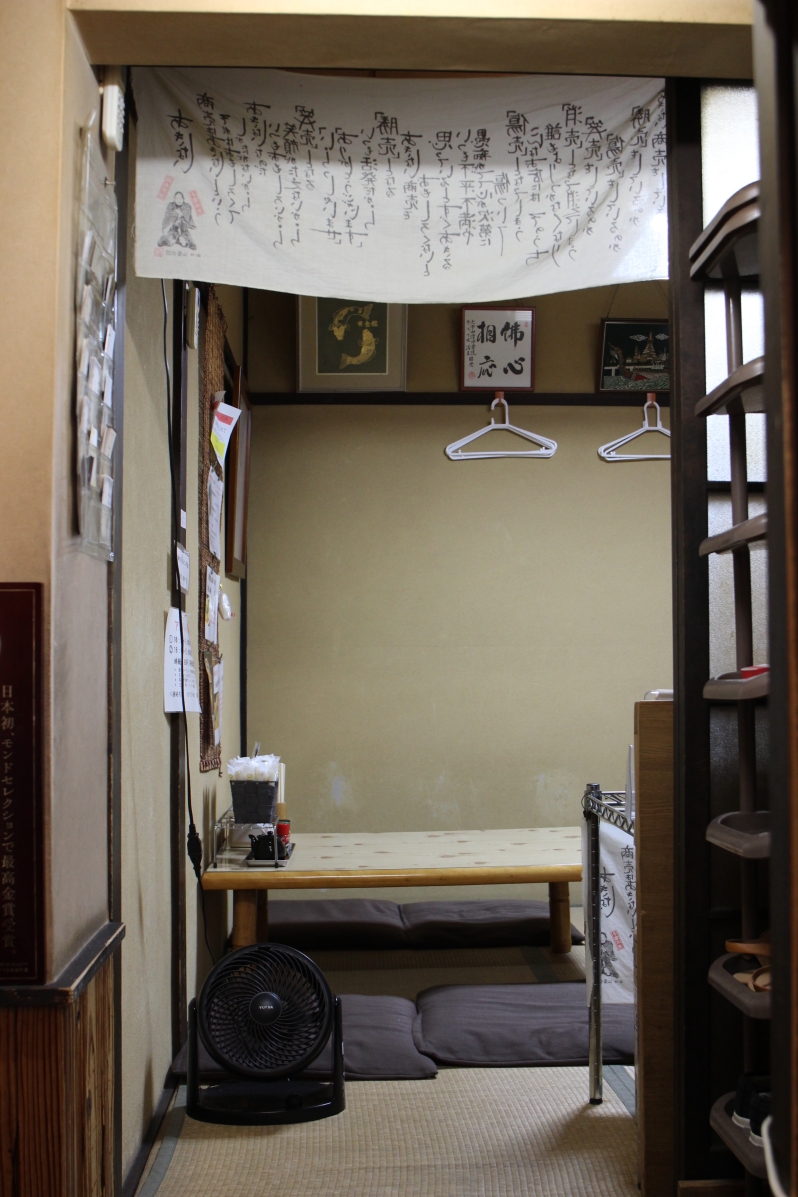 Inside was narrow with only a few counter seats, but a tatami room with low tables at the back. Tatami rooms are rarely seen in ramen stores in Tokyo and so it reminded me I was in a countryside town. But as a strong reminder of the modern, digital photo displays were perched along the counter, flashing up photos of customers who had gleefully drained their bowls.

Without too long, my bowl was sitting in front of me. And I gleefully drained it. 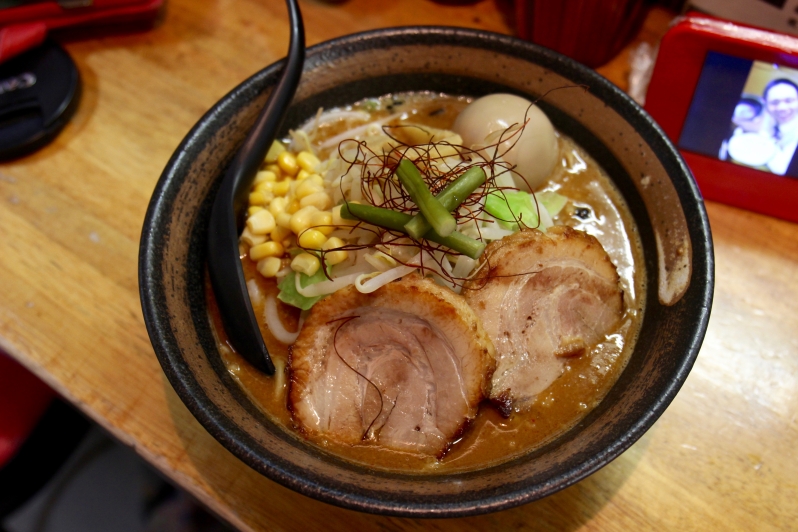 My bowl of special miso had a lower broth-to-noodles ratio than the average bowl of ramen. Fortunately, the broth was potent enough that I didn’t need to scoop out spoonfuls of it to add flavour to the noodles. In fact, I found the broth level to be just right.

To be honest, at first sip, I found the broth a little dull. Thankfully, it wasn’t oily or too thick as is often the case. But it didn’t hit me with a depth of flavour. It had a very distinct yet mellow miso flavour with warm and fruity notes from the miso. Any spice was undetectable and I thought about going back outside and buying a “thunder” ticket! However, I grabbed a jar of Sichuan pepper and then black pepper and poured liberally into my bowl. This accentuated the miso perfectly. 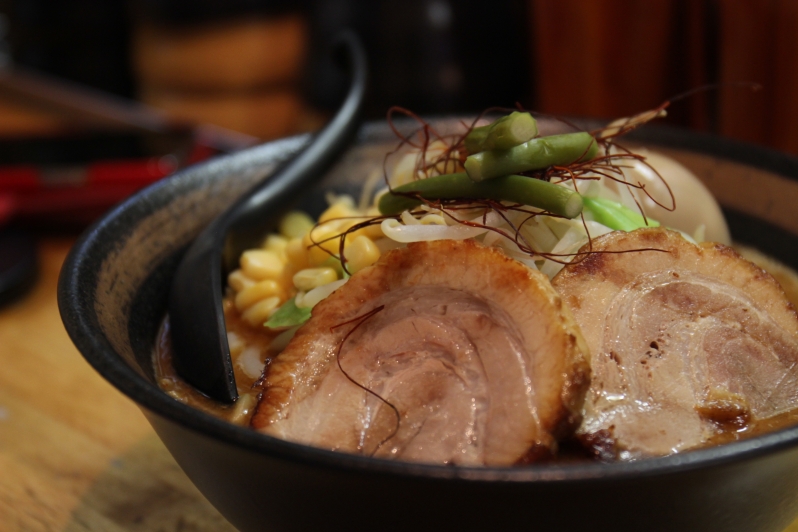 Suddenly, I found myself relishing every mouthful. This was a ramen dish that came together as a whole. The noodles were springy and wavy, catching just enough broth as I slurped them up. The char siu was tender and tasty – very good, if not excellent – and the soy egg was close to perfect. I wanted two.

But I think what I loved most was the generous portion of vegetables. The three asparagus(?) stalks on top. The sweetcorn was brilliant. And so many bean sprouts. Dining at Daidarabou made one of those rare occasions where I actually feel like – and actually do – in-take some veggies!

A bowl of ramen should never be judged until a little while afterwards. Is there an after-taste? Are you so thirsty you feel you could drain a reservoir?

None of these applied to Daidarabou. Just occasional mellow wafts of miso. And a desire to try the rest of their menu.

Daidarabou (大大坊)  4/5 – Made with care and pride, this was a solid miso ramen offering that has left me hankering to try their shoyu (soy) broth too!