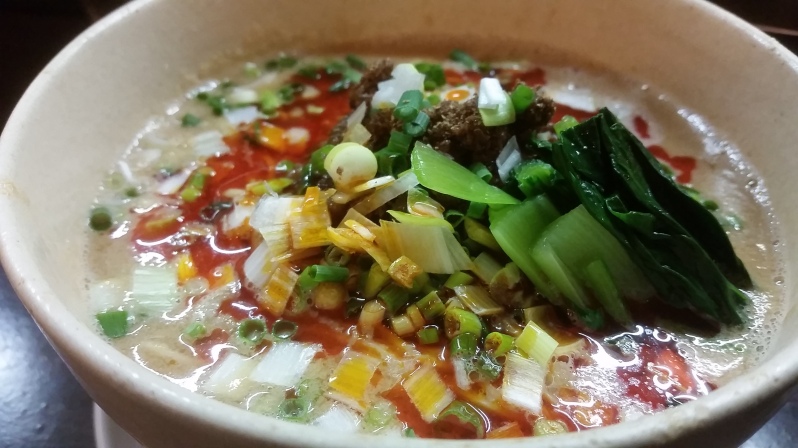 Yesterday, I went to film sumo wrestlers stomping in the new year at a shrine in Tokyo.  Which was a fantastic experience.

Every year, the top-ranked sumo wrestlers go to Meiji Shrine where they perform Dezuiri – a ring entering ceremony, which involves some impressive foot-stomping and feet shuffling.

For the interviews afterwards, I was naturally up close and personal with them! Their hair is held in place by an incredible amount of hair gel/spray(?) that smells sweet. And when they walk, the ground actually shakes. 155kg of fat and muscle are truly awesome – in the original sense of the word – when viewed up close.

You can watch a version of the action here.

This was, of course, very exciting. So there was NO WAY my colleague and I would be going to that with an empty stomach. We need sumo stamina to film sumo!

“I’m starving,” she said. “I want to eat something spicy!” I very much approved of this idea. In fact, this is probably why we’re good friends and not just colleagues.

So naturally we went to the Tabelog top-ranked tantanmen (Chinese-style spicy noodle) shop in the Akasaka area.

On the review website, Uzumaki Bekkan scores an impressive 3.64, which puts it in the top 5000 restaurants on Tabelog in Japan (“taberu” means to eat in Japanese).

It took us a little while to find as it’s a narrow door without a prominent sign. The door opens to some downward steps and a tiny room with only 5 seats. We were a little take aback by the size – but fortunately only two men were waiting in front of us. In counter noodle shops like this, the policy is eat and leave. Which suited us just fine.

The menu consists of an uncomplicated three items: tantanmen (spicy noodles with mincemeat and sometimes sesame/peanut), wonton noodles (dumplings) and without soup noodles.

We ordered a bowl of tantanmen each (900 yen) which pleasingly came with an otoshi (little starting dish) of carrot and daikon. Given vegetables are a scarcity in cheap eats in Japan – being on the whole more expensive than meat and fish – this was a very pleasant surprise.

Uzumaki Bekkan seems to be a one-man band and the shopkeeper, with focus and care, concocted our bowls of spiciness.

And with one sip, we realised we were onto a winner.

There are many kinds of tantanmen. There are some which are oily, some with strong sesame or peanut flavours, some are more acidic, some really go to town with Sichuan pepper.

The tantanmen in this shop were relatively light. The soup had pep but wasn’t too spicy. It wasn’t oily or heavy or peanutty. But it was rich in flavours and so satisfying to drink. Add to that perfectly cooked noodles and a really impressive amount of greens, and it really filled a whole – literally and figuratively.

My colleague taught me a new Japanese phrase “koku ga aru”, which translates as “it has depth of flavour.” I did indeed dive deep into its delicious depths.

Sometimes I feel bloated and/or heavy after tantanmen, but Uzumaki Bekkan has got the feel-good factor spot on. In short, I did not go to film sumo wrestlers feeling like a sumo wrestler.

I can tell that you probably want some after my glowing description! Well, be warned: Uzumaki Bekkan is only open 11.30am – 2pm on weekdays. If you’re in the area though, it’s highly recommended for some spot on spice.

Uzumaki Bekkan 4/5 – tantanmen with plentiful veg. With the feel-good factor and taste satisfaction, it’s highly recommended for lunch in the Akasaka area. 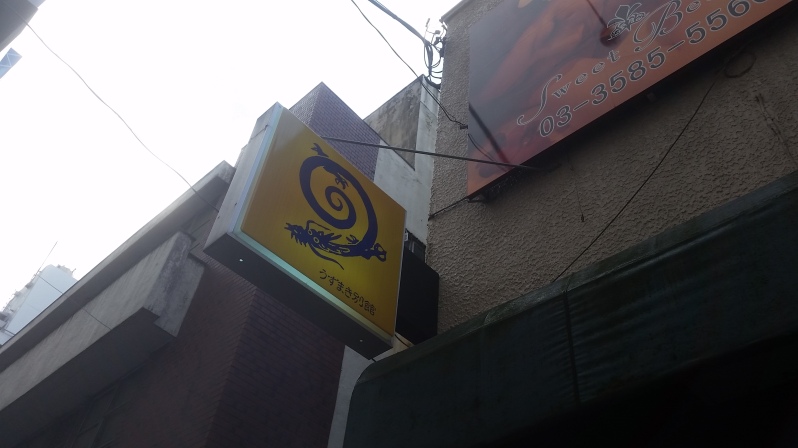