Japanese food has boomed in the West over the past few years. Not just ramen, but all kinds of stylish “Japanese” places are popping up, with polished wooden surfaces and all fanfare of fusion dishes.

Although I’m all for experimentation, I’m naturally a little sceptical  when self-professed Japanese food lovers claim that going to one of these trendy joints is evidence!

“Places like this don’t actually exist in Japan,” I say, trying my hardest to tiptoe round being overtly sanctimonious. “And, no, Hirata buns, are a Western take on Taiwanese street food, and no, they have nothing to do with Japan.”

But having visited Sanpotei Tokyo Lab, I can now offer up a different response. There is at least one trendy place doing experimental food in Japan. And, naturally, it does it better!

Sanpotei Tokyo Lab actually has an interesting history. It belongs to the larger Sanpotei group, which originated in Niigata in the north west of Japan in 1967. The group have a string of ramen stores and family restaurants, as well as a couple of Chinese joints and an Italian place! And they’ve just opened a stylish-looking Shanghai Fun Dining. They also have ramen joints in Canada (opened this year) and Singapore.

Sanpotei Tokyo Lab only opened in November 2015 so it seems the group are doing some rapid expansion.

Although my dreams of a quirky, independent owner cooking up secret passion projects were somewhat shattered upon discovering this corporate history, there is no denying that love, care and dedication to quality has been poured into every part of Sanpotei, from the sleek interior to every ingredient.

This is not your average noodle joint. They have a whole selection of sake from Niigata, and you can even order a mini-tasting set of daiginjō, which is one of the highest quality types of sake. I even drank a cloudy plum wine (nigori umeshu, 550yen)!

They also have a menu with intriguing dishes that may require a little explanation. Staff were so obliging (and they also arranged for the five of us to fit round one of the four-people tables!)

The overall theme of the food is Sichuan. So we wasted no time in ordering shumai pork dumplings (4 for 530 yen) and handmade wontons (530 yen). Dumplings in Japan, even at Chinese places, tend to be disappointing compared to the real deal (ie. ones in China, Taiwan etc.). Yet, without a doubt, these were the most exquisite dumplings I have tasted in Tokyo. So much so that we got the wontons on a repeat order, with me desperately scooping up chilli oil with each mouthful.

When it came to the noodles, we ordered the chilled tantanmen, clearly created for the stifling and sticky summer in Tokyo.

Tantanmen is a noodle dish originating from Sichuan – featuring noodles topped with ground pork in a peanut and/or sesame taste broth, often spicy and sometimes with a fair amount of Sichuan pepper too. Basically, it’s a noodle dish containing all of my favourite things and I LOVE IT. I accidentally started a tantanmen lunch cult when working at Reuters in Tokyo, resulting in groups of us making weekly raids on local stores (Akasaka has an excellent selection – see Uzumaki Bekkan, for example).

Sanpotei has a very refined take on tantanmen – for starters, it is topped with luscious vegetables, an absolute first! Aubergine, okra, sweetcorn… there was even a cherry tomato.

The broth had a pleasing amount of heat despite being cold, and it had a mellow flavour that allowed it to slide down easily. It wasn’t a salty, spicy, and oily occasion and as a result was one of the lightest tantanmen I’ve ever tried. Light, but richly flavoured and satisfying. I would definitely order it again, but it wasn’t the flavour punch I often seek when I crave tantanmen. 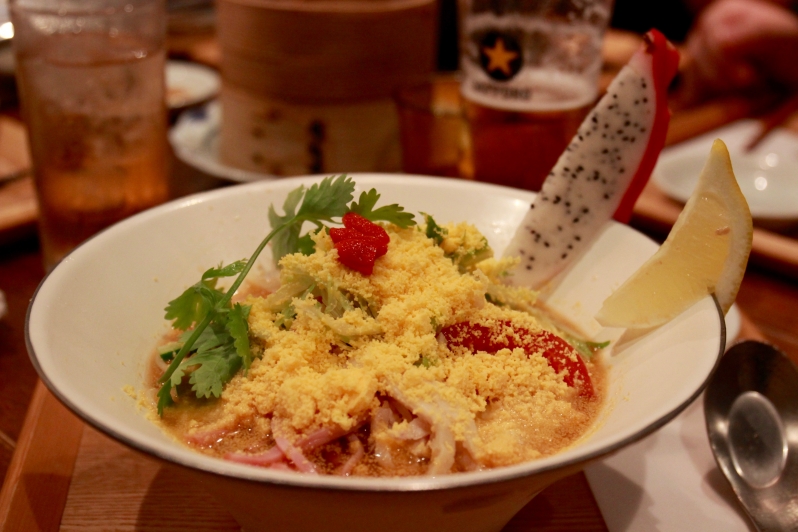 My friend ordered the non-spicy version, which featured a dashi-flavoured broth and, yes, a slice of dragonfruit and a slice of lemon!

Another friend chose straight off the regular menu – tucking into their Zentoro Mabomen – or mabo tofu noodles (1000 yen). For me, there wasn’t enough Sichuan pepper in there to be mabo tofu, but the flavour was rich and hearty…and I drank the leftovers. Then felt mildly disgusted with myself because I was so full (I had eaten a giant double ice-cream before sitting down for dinner…)

Given that it was a Sunday night, that two of us had just sat exams and one had come from an all-day professional conference, we needed some food magic to lift our spirits. Sanpotei Tokyo Lab was the right kind of experiment – and we will definitely be testing it again.