Let’s get straight to the important difference between “hanba-ga-” and “hanba-gu”. The former is indeed a meat patty wedged in a bun; the latter a meat patty minus bread, often served on a sizzling hot plate with some kind of sweet sauce. For the sake of being easy to understand, let’s call them “hamburgers” and “hamburgs”.

It is my very professional opinion that the Japanese do hamburgers terribly, whereas hamburgs tend to be rather good. 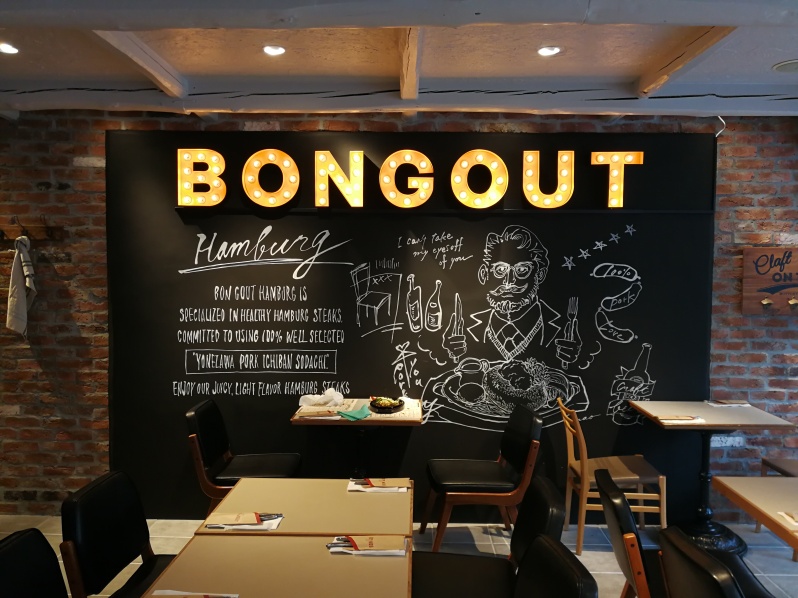 So it was with some delight that a branch of Bon Gout Hamburg opened about 3 minutes’ walk from my office.  I thought this was a large chain but turns out this is just their third store with another in the Shibuya area, and one in Kichijoji.

The concept is pretty simple: hamburgs made from Yonezawa pork. They’re aiming for a European feel with knives and forks, brick walls and wood furnishings, a salad bar and craft beer.

AND IT ACTUALLY SEDUCED ME. I felt confident when ordering that my coffee might actually be not revolting (I never overdo confidence…)

We settled ourselves into the bright and slightly kitsch room. Top of the menu is the signature Bon Gout Hamburg – 280g of prime pork, stuffed with cheese and nuts. Shamefully, I didn’t read any further as I merely scanned the prices. At 1280 yen and the priciest, this was the all in baby.

Next up, we had to choose our sauce: demiglace, cream mustard, or fruits. The waitress was more than happy to give advice but once I saw mustard, I was sold. She said it was a good choice as the cream went well with the cheese filling. This got me a bit excited.

We upped our set (380 yen) for unlimited salad from the salad buffet and one drink. The salad buffet was simple but like the first steps of heaven. Vegetables are so expensive in Japan that unlimited amounts of veg actually made me mildly deranged – I heaped lettuce, cucumber, peppers, broccoli, cauliflower, radishes, and onion onto my plate. And then selected one of free dressings (a mild Italian that contained black pepper). 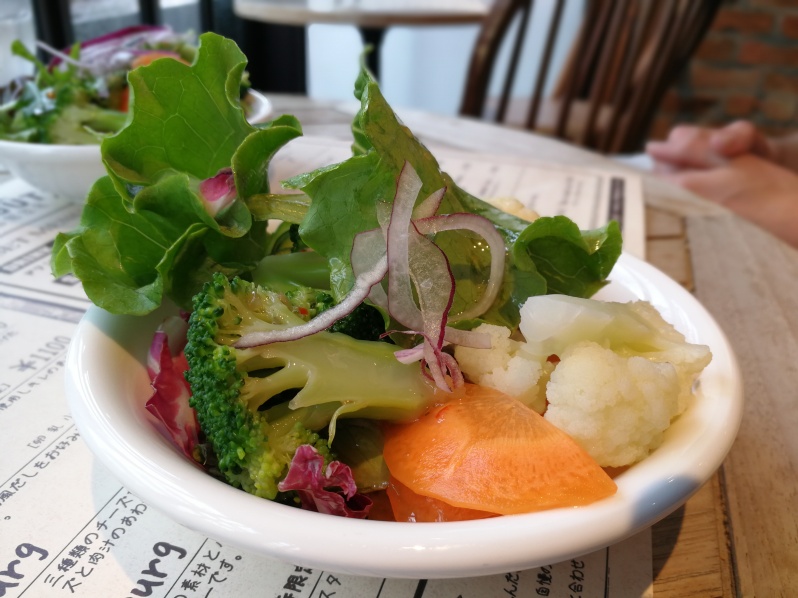 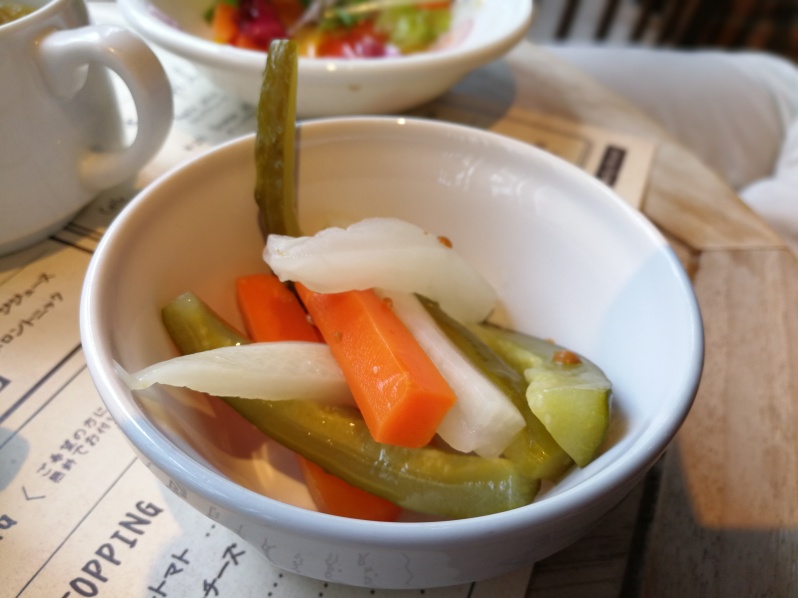 Next up, a cup of simple onion soup appeared as did a plate of very crispy and crunch pickles. We had a choice of rice or bread to go with our main, and had opted for bread. It wasn’t the tastiest in the world, but it had a proper chewiness to the crust and wasn’t sweet, which basically made it a step above most bread in Japan, which is actually cake in disguise. Beware.

The piece de resistance really took its time. This added to our desperation and certainly enhanced its visual appeal when it arrived: a  succulent, generously sized patty, topped with mashed potato, and accompanied by a soft poached egg and some veggies.

I immediately sliced into the patty and watched with delight as thick cheese oozed out. I prepared myself a ridiculously luscious first mouthful.

“I wish they’d turn the music down,” my friend complained.

I took my first bite, and- “I wish you hadn’t mentioned the music!”

Atmosphere-interrupter aside, I very much enjoyed my meal. Texturally, the dish was spot on – the softness of the patty, gooeyness of the sauce and egg, offset with an occasional nutty crunch. But flavours were a little on the mild taste – despite sodium levels disturbingly high (I was so thirsty after this meal). Nevertheless, it was a mop-the-plate-job and the generous basket of three large pieces of bread a head was welcomed. And I even made it back to the salad bar again.

As instructed, our waitress brought over a coffee post-meal, and as explained it was pleasing in a drinkable kind of way. No taste of beans that met a tragic end as they were overly charred, and no taste of nothing, which is always to be welcomed (again: beware the coffee-tea – coffee so weak it might as well be tea).

All that was left was for me to take a few pictures. Which got the staff switching on the Bon Gout lights and replace the salad bar dishes, which they had been packing up. It was so kind of them – and they probably have no idea they’ve ended up on this blog!

To end on an extra plus, there is a point card system – buy five hamburgs for a free topping, ten for a free hamburg. And once again, it’s only 3 minutes from my office. Oh dear.